A possible way out for Muhyiddin

A friend who knows a lot of things told me via Whatsup yesterday that Muhyiddin may resign from his PM post tomorrow.

He didn't eleborate and I didn't ask for more details.

I  was sceptical. Heard all sorts of nonsense of late.

Then it occured to me that there is a possibility that Muhyiddin may do exactly that.

His position is not good now as Umno is threatening to kick him out of Putrajaya soon.

So, this is how I think he may do it.

Muhyiddin will hand over power to Anwar and bring Pribumi Bersatu back into Pakatan Harapan.

And with that Umno, Dr Mahathir and other anti-PH gang will be screwed.

Muhyiddin will just say he's doing it for the good of the country.

No election amidst the Covid-19 pandemic, which is getting worse.

Anwar will happily accept it.

After all he doesn't have any big quarrel with Muhyiddin like he does with Dr Mahathir and the Umno gang. 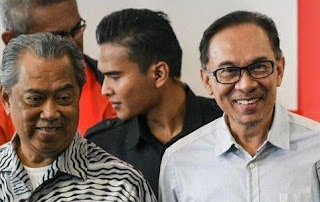 Heck, Anwar may even kiss and make up with Azmin and the gang.

I don't see any problem with him doing that for the sake of power......well, he can kill them off later what.

You all know lah how politics are in this country.

PH will then have a clear majority in parliament, better than Perikatan Nasional now.

As for Muhyiddin, Anwar may give him an important position and let his PBBM continue to chip at Umno's Malay vote bank.

I even think that there's a chance that Pas may join Muhyiddin into PH. Hey, they can keep some of their ministerial posts what.

Afterall, Anwar may need them to keep PBBM disciplined in PH. You know, divide and rule kinda way.

But then again if Pas decides that it can't stand DAP in PH, it may just side with Umno and the gang including the Sarawak parties in the opposition camp.

Whatever it is, the Malay unity wave seen during the consecutive BN's by-election victories over a year ago may has subsided by now.

Even if it hasn't, Anwar, DAP and gang have over a year to do what they can to crush the opposition.

Anwar may even find an excuse to put Dr Mahathir in jail for all the handsome old man did to him back then.

Untuk keadilan, he would says.

Oh, Najib, Zahid and others will definitely go to jail one. That's for sure.

Okay, that's my thought on politics for the day.

Going to take a nap now.