I was driving to the East Coast when they announced the State of Emergency yesterday.

Yeah, I was escaping the strict MCO about to be imposed in KL when that happened.

I was actually okay when PM Muhyiddin announced the lockdown the previous day but think the Emergency was unfortunate.

The lockdown is understandable because Covid-19 is now worse then when it first hit the country early last year. However, let us be honest about the Emergency being declared for political purposes.

With that, the current government has admitted that it can't handle Covid-19 in a democracy. That's why it needs the Emergency, which practically suspends the country's democracy.

So, that's the way Muhyiddin's administration intends to handle the situation.

Well, I think it sets a precedence for other governmemnts which will come after this - faced with a crisis and losing the majority support of elected representitives: declares an Emergency.

Najib could have done it when he was at the brink of losing GE14, and so could Dr Mahathir too when Pakatan Harapan was emploding. Just cook up something distressing and says the government needs to be focused and not be distracted by the opposition to solve it.

Najib accepted defeat and Dr Mahathir resigned as per the democratic process.

Muhyiddin, instead, just changed the game.

Something like; I'm losing this football match, so I'm switching to rugby.

Not very fair, isn't it?

It's until at least August, so I guess Muhyiddin now has time to convince Umno to continue supporting him and his administration....or getting their troublesome leaders being placed in jail for one reason or another.

Guess it's worth a try.

Whatever it is, I doubt it would change things much on the ground.

The most it would do is to prolong the uncertainty.

When BN lost GE14, the Umno grassroots mostly stayed with their party despite some of its leaders switching over to Pribumi Bersatu and became ministers and such.

I believe it will be the same this time.

Just imagine the Emergency being extended till then. Our economy will definitely suffer and Malaysia probably becomes a new Cambodia at that time.

Hey, it's possible okay, with the Covid-19 damage and all.

By then, I'll probably be selling pickled mangoes at a traffic light like these guys; 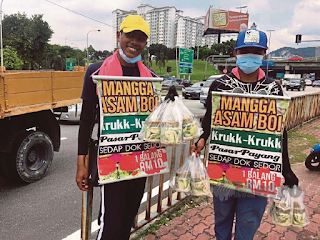