Maybe we deserve a totalitarian regime...led by Sajat

I'm now at my hideout in the East Coast trying to do my best working from home.

Never been comfortable working like this as I'm used to my routine of going to the office.

Anyway, I suspect this MCO/CMCO is going to be for a long haul.

The Health DG yesterday said it would take at least until May to flatten the Covid-19 curve.

Therefore, the current two weeks lockdown is almost certainly going to be extended up to even more than a month.

The damage, especially economic, is of course will be enormous.

But, I guess we all simply have to bear with it.

This is to save lives.

It's better to be a poor third world country with living people than be an advance country with dead people. Right?

Yea, I really believe now that our country is on its way to be something like Cambodia or one of those African countries of poor people.

Something like going back to the 1950s when up to 70 per cent of our people were living below the poverty line.

And there is also the possibility that we are going to lose our democracy.

The precedence has been set - once power is in our hands, don't ever let it go. Use any excuse to hold on to it.

Soon, people will start campaigning that it's better to get rid of democracy as it would be easier to manage the country by having a government which is all powerful and without check and balance....like how it is now under this State of Emergency rule.

Well, never mind. If it's fated to be like that, then we just simply have to get use to it.

After all, some people in North Korea are still happy despite their country being like that. We can be like them too, right?

Anyway, I have think quite a bit and concluded that maybe we do deserve to live under the rule of a totalitarian regime.

It's because I found that many of us do think that it's okay to bully others.

I hate bullies and there are apparently many of them in this country, either at the workplaces, schools, and even in social media.

Just look at the recent Jais versus Sajat case.

Why do they need to forcefully handcuff Sajat for an interrogation after she voluntarily went to the Jais office?

I have seen the recording of the incident, and I don't think they should have done that. 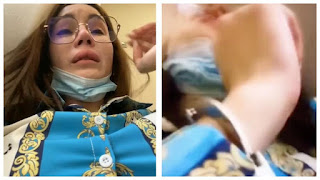 If they need to charge her, then just charge her instead of behaving like a bunch of thugs.

And there's no denying that the hundreds of comments that came with the video were purely a case of  mob bullying.

The worst was that they use Islam as their excuse for bullying.

Suddenly everyone is a defender of Islam and feels to have the right to use derogatory words to pass judgement on another human being.

I don't thik that's what Islam teaches us.

Trust me, I'm no fan of Sajat and I think she's annoying beyond belief. But then again, she's still a human being and deserves to be treated as such.

Really, I find it disturbing that so many of us have that bullying mentality.

Buli pondan seems to be an enjoyable pastime.

Oh ya, maybe that's why Allah is punishing us by letting an undemocratic government to rule over us.

If we are bullies, we have no right to later complain about being bullied by such a government.

And then there's the never ending Covid-19. Maybe that's Allah's punishment for us too.

So, don't complain too much, okay.

Just pray for Allah's forgiveness and try to be a better human being.

Maybe then things will change for the better.

Hmmm...maybe I'm saying all these to myself more than to you all.