I was quite happy when I read this story,


It's because I personally know some of the names in this list are good guys,

Those I personally know to be good are;

1. Samsol Bari Jamali
Met the guy several times and aware of his good track record in managing things. He's the one who led the BN machinery in Ayer Hitam in GE14 where MCA's Wee Ka Siong defeated DAP's Liew Chin Tong despite BN's heavy losses elsewhere. Quite a practical guy as well as courteous and willing to listen, especially to his seniors. If there's one advice I like to offer him, it would be - work even harder YB. I wrote a bit about him in this post;

2. Mazlan Bujang
A straight talker, like his brother Maulizan of Tebrau Umno. This guy is an idealist. A bit brash sometimes but it's a quality I much appreciate in a state exco member, especially in Johor where the state government would likely face constant interference. We need someone who is straight as an arrow willing to say exactly what is right and what is wrong. With him in the exco line up, I'm counting on no hanky panky going through without him shouting out to stop it.

3. Ayub Jamil
I know him from all the way back during the run up to the 2004 GE. A good senior Umno assemblyman who serves his constituents well irrespective of race or religion. He was nominated as the BN's candidate for the Batu Pahat parliamentary seat for GE13 by the Johor Umno liasion committee led by its then chief TS Abdul Ghani Othman. His candidacy was however rejected by Najib after the much disliked then deputy education minister Ahmad Puad Zarkashi threw a tantrum insisting he remains as the Batu Pahat MP. The result - BN lost the only Malay-majority constituency in Johor in that election. I don't think that would have happened if Ayub was the one contesting the seat. I have not heard anything bad about the guy over the years which is quite something for a politician.

4. Onn Hafiz Ghazi
I first heard about this young man during the GE13 campaign. Smart, hard working, polite, and sincere were qualities I heard about him at that time. He was just a young junior Umno guy then and it was said that he didn't mind being assigned to minor things despite him being the great grandson of Umno founder Datuk Onn Jaafar. I however only met him in person in the aftermath of GE14. My assessment of him after several encounters was that he looked the way he was described to me back then. I have high hopes for this guy to be part of the future of a good Umno.

As for the others in the exco line-up, I have to admit that I don't know much about them. However, I have not heard anything bad about them either, which for me is good enough for the time being.

I also have considerable confidence in the new Johor MB.

I believe Hasni had chosen the right people for his exco line-up, based on the four whom I personally know. They are all good to me. The rest are probably good too.

After all, Hasni is for me the best guy now to lead in Johor. 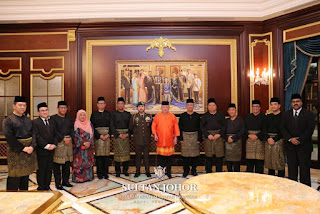 I first predicted Hasni becoming MB in this post in October last year;


excerpts;
I'll soon write about the next Johor state administration which I'm predicting will be headed by Datuk Hasni Mohammad.
I know the guy and I believe he is good.
Okay, maybe not as good as TS Abdul Ghani Othman, but he will definitely be better than the current and past Pakatan MB clowns.He is also definitely better than Khaled Nordin.

I also mentioned a bit about Hasni in these posts;


excerpts;
Special salute to Johor BN chairman and Umno chief Hasni whom I believed as being the one who made that final decision and his boss Zahid, who allowed him to make the decision.


excerpts;
Third is Hasni, the Johor Umno/BN boss who is the real mastermind behind the landslide victory in Tanjung Piai. The guy doesn't speak much but he is good at what he is doing. Always low key, yet very effective. Very much like my favourite Umno leader of all times TS Abdul Ghani Othman. Hopefully Hasni will be the rightful successor of Ghani after the next general election.


excerpts;
A very high ranking Johor Umno leader asked me the other day whom should BN field in the upcoming Tanjung Piai by-election. I actually felt honoured that he asked for my opinion. After all, I'm just a nobody while he is a very important Johor Umno decision maker.

Yup, that unnamed "very high ranking Johor Umno leader" whom I talked to as I wrote in that post was actually Hasni.
Posted by Annie at 04:49