Hopefully, the rakyat will get to decide in the end

So, you all happy today?

Well, not all of you, I guess.

Muhyiddin as PM, that's the outcome of Pakatan's demise. 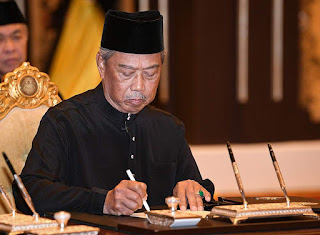 Such a pathetic ending for them.....at least for now.

They can try again when parliament opens for new session.

Try to get that no confidence motion against Muhyiddin.

I actually don't mind if they get it if the end result is that we can have a fresh general election.

Whatever the outcome, the rakyat decide.

A fresh polls is not for Pakatan but for the rakyat.

Pakatan people have no right to claim anything now that they screwed up big time over the whole thing.

They fought among themselves and screwed up.

In fact they have been screwing up since two years ago when they formed the government.

Theirs was the worst government that Malaysia ever had.

I don't think I have to give any example here again as I'm sure that you all know what I'm taking about.

If we are going to have that fresh election, I want them to be punished for that.

And not punished by anyone but the rakyat, not by some technicalities exploited by some quarters as it is now.

The winner, whom I'm quite confident would not be Pakatan will be truly chosen by the rakyat.

No more crooks in the government....or at least lesser than before.

And that government will not be beholden to anyone other than the rakyat.

Since I'm now a BN supporter, I hope they and their allies will win and do the right things.

No more nonsense and no more people who fucked up things before GE14 should be among them.

The rakyat can decide on that by voting the right candidates being fielded.

I don't mind bad people from BN to lose in the election, the same as those from Pakatan.

Hopefully the rakyat have became wiser after all the nonsense and able to choose wisely.

We need a strong and capable government again to manage the country.

Not a government that comes to power by lying, cheating or playing politics and then screwed up everything.

Not a weak government led by a minority party which is beholden to all quarters and could crumble at any time just like the Pakatan's and the incoming one.

We need the stability in this country to move on.

Well, hopefully we can have that very soon.

If not, then we need to be patient and wait for another three years to go to the polls again.

Whatever sufferings we need to endure till then, are the price we have to pay for our democratic system.