A friend the other day asked me to comment on Muhyiddin's Cabinet of whhich I said to him that I rather wait a bit longer.

I do have complaints about the line -up but for now I prefer to let them do their work first, before judging them.

After all, no one really gives a shit about politics with the Covid-19 situation currently looking as if it's getting worse by the day.

Personally, I want the Muhyiddin's administration to do well in handling the coronavirus crisis.

It's hurting the people, the economy, the country and everything.

So, politics doesn't matter at the moment.

If Pakatan had not collapsed and is still in power now, I would have wished them to do well too as far as the Covid-19 is concerned.

In fact, I think Dzulkefly Ahmad, who was the Pakatan health minister did well in the early stage of the outbreak.

I hope his successor Dr Adham Baba will do even better. 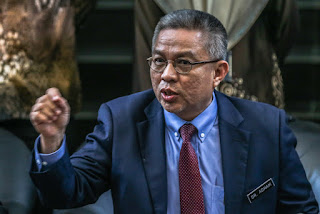 I last met Dr Adham just before GE13 when I was still in Johor and I kinda like the guy.

At that time I was even hoping for him to replace the retiring TS Abdul Ghani Othman as  Johor MB.

I did a posting on him in support of his candidacy;

Not sure if he's still the same now, but hopefully he still does.

Meanwhile, the spin machine apparently continues its spins, this time to undermine Muhyiddin and his allies, particularly those from Umno.

Covid-19 or not, they continue with their work.

It does not matter to them that people are fearful of the coronavirus as for them getting back the power for themselves tops everything else.

In Umno pushback over Cabinet,

a flash point for Muhyiddin to avoid

It's an obvious attempt to pit Muhyiddin with Umno.

But then again, just look at the Umno leaders quoted in the spin


Among those from Umno who have been vocal over the Cabinet posts are Kinabatangan MP Datuk Bung Moktar Radin and Umno Supreme Council member Datuk Seri Azalina Othman, who both questioned the allocations given to the party.
Citing arithmetic, Azalina said Bersatu MPs only made up 28 per cent of Perikatan Nasional (PN), but gets one prime minister and two senior ministers, referring to Datuk Seri Mohamed Azmin Ali and Mohd Radzi Md Jidin.
Meanwhile, she said Umno only has one senior minister — Datuk Seri Ismail Sabri — despite making up 35 per cent.
Umno’s Pasir Salak MP Datuk Seri Tajuddin Abdul Rahman had said earlier this week that the appointment of Azmin as a senior minister in the new Cabinet makes him and others uncomfortable.
Yesterday, Umno vice-president Datuk Khaled Noordin expressed discontent with the party’s role in Tan Sri Muhyiddin Yassin’s Cabinet, saying it was not “subordinate” to Bersatu in the PN coalition.
Former prime minister Datuk Seri Najib Razak also joined the chorus of discontent yesterday, clarifying that the PN government is not a Muafakat Nasional and Barisan Nasional (BN) government.

I never really like any of them except for Najib. And in this case the guy was not even complaining about the Cabinet. The writer put him there to make the number of "disgruntled" Umno leaders a bit more, I guerss.

Whatever you all want to say, for me Najib is okay as I never really believe that he stole all those money. In his case I rather wait for the court to decide.

As for the others quoted in the spin, I even despise two of them and regard the group as those whose political career had expired.

Well, they can continue to spin, as it doesn't matter to me. I still believe in freedom of expression.

Just that I hope this new government can fix things.

So far, I kinda like its moves. First thing it did was the setting up of an Economic Action Council which I think is crucial as we continue to suffer from the slump.

Hopefully the council would be able to turn the tide and reassure the public of a minimal impact from all the talks of an impending global recession.

Then there's also its stepped up of effort to contain the coronavirus outbreak which I believe was doing relatively well.

These are still early days, yet I hope the new government will be able to shoulder the responsibility.

In this time of crisis, we should put aside our political differences and support whatever effort necessary for our country's interest.

Anyway, how much worse could this new government be compared to the now defunct Pakatan Harapan government, right?

It may be labeled as a backdoor government, but if it performs well, why should we care about the politics?

At the very least, we know that these bunch of people in the new government didn't lie or make fantastical promises to the people like what the Pakatan people did.

Them lying and betraying their own fellow politicians doesn't count, okay.

Just don't do that to the people. Serve them well instead. That  would be good enough.
Posted by Annie at 13:30