Saw several tweets celebrating statements by Securities Commission and MACC that they will investigate AirAsia for alleged involvement in the Airbus probe, which has since been settled.

Typical of those Malaysians who made that tweets.

We do enjoy seeing anything good that actually ours getting in trouble, don't we?

Especially if we have personal grudge against the entity such as AirAsia or the people there.

We don't even really care whether the allegations were true or false.

AirAsia denies involvement as alleged in Airbus probe by the UK

We just want to whack the budget airline because its successful and its Malaysian. Really.

Somehow, it irritate us to see something Malaysian being so successful. 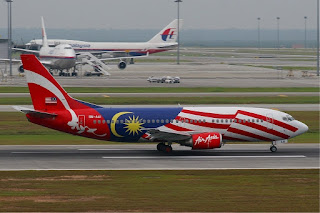 If we can make it crash and close shop, the better, right?

What? Because AirAsia's boss Tony Fernandes is an irritating guy? Come on la, I'm no fan of Tony too, but what that has anything to do with Malaysia having the best budget airline in the world.

In fac,t I think AirAsia is just about the few remaining things that we Malaysians can still be proud of in this age of Malaysia Baru.

Malaysia Airlines? Well, I don't have to comment on the state of affairs of that national carrier, don't I?

But as I wrote above, we just can't stand someone like us or something like ours doing better. We are just itchy to see others' failure.

Malaysia's national news agency Bernama even have a story about AirAsia shares going down after the allegations against the airline. Hello, the market is bad all over la this morning, because of the Wuhan coronavirus outbreak getting worse.

Never mind. I know, it's pointless trying to get people to correct themselves over these sort of things. They just enjoy whacking so much.

Just like during the run-up to the last general election.People want to believe the stories told to them so much because they enjoyed listening to those stories.

They don't want to believe the truth because there's no fun in it.

And of course those assigned to tell the truth were lousy at their work while those who told the lies did a great job.

Now that we know the truth, we simply have to bear with the lies and be patient until the next general election.

I hope it doesn't have to come to something like that in this AirAsia case.

If the airline does badly, thousands of its employees would be affected and the impact will be quite bad for the country's economy as a whole.

I don't think we want something like that to happen.

We may change back the government to BN if we don't like the current Pakatan one but I don't think we can easily replace AirAsia if it closes shop just because some people don't like it due to some old itchiness.
Posted by Annie at 14:00