I think this is silly.

"The reports were on the former prime minister’s programme in Pantai Cenang today.
“Police have noted their concerns, and have already advised the organisers on it and they have reverted to us that it will only be a breakfast function at a restaurant and that no speeches will be made,” he told Bernama.
They should just let Najib be.

He was just jalan-jalan and meeting his fans for breakfast.

Even if he is campaigning like what he did in Cameron Highlands, I don't think they should try to stop him.

Lodging police reports like that was just being over the top.

In case we forget, this is still a free and democratic country.

Najib is free for now and he still has his democratic rights.

Well, the courts are yet to find him guilty of anything.

If he's found guilty of all those charges, then that's another story lah.

What ever it is, the guy will not be the PM again, okay.

In fact, I also don't want him to be PM again.

And we shouldn't blame people for being his fans too. 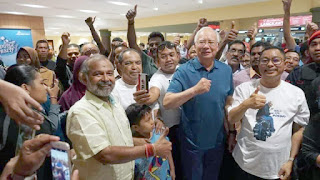 I have to admit that his Facebook postings were quite sharp and witty these days.

That's probably why he's quite popular of late.

Also bear in mind that Najib's administration was not all that bad.

Some of his initiatives were even praised till this days.


If Pakatan people can't stand that, then I suggest for them to get their leaders to do their job properly.

Really, if Pakatan leaders can do those things, it would stop Najib and his growing fan club.

No need to be silly by lodging police reports just to stop Najib from having breakfast with people who like him.

Also, Pakatan people should get AG Tommy Thomas to speed up the legal process against Najib.

That way, Najib could be jailed quickly and stop causing discomfort to them.

For one thing, they should get him a Bahasa Malaysia tutor so that he can understand the national language better as I think that's holding him back a little in handling Najib's cases.

While they are at it, I think they should also get some of the ministers and their deputies Bahasa Malaysia tutors too to make them more effective.

Can avoid these sort of things;


Really. I believe things will be better for Pakatan people if they can fix these problems.
Posted by Annie at 19:22