So, Shafie Apdal is not going to have his own little kingdom.

I think Dr Mahathir saw the guy is trying to set up one and decided not to let him.

Dr M: PPBM to enter Sabah
I also think that the move was because  Dr Mahathir wants to strengthen Pribumi Bersatu in face of the growing Umno-Pas alliance threat.

Whatever it is, Shafie and others, particularly DAP were obviously upset.


Of course, Shafie was upset because with Dr Mahathir's party there, he can't have Sabah the way past leaders such as Tun Datu Mustapha had it.

On this I'm happy.

Shafie is not known to be an incorruptible leader when he was with Umno. Dr Mahathr knows this and he has to make sure Sabah will not be the guy's private property.

I think many Sabahans agree with that as they don't want Shafie to be a Sabah king.

As for the Sabah DAP guy getting upset, that's probably because what ever lucrative thing he had kowtimed with Shafie will not work out now.

With Dr Mahathir's people there they can't do as they please. Ya, that's why they were unhappy.

Meanwhile, DAP leaders in the Peninsular seemed upset too.

Lim said just like the admission of former Umno members into PPBM, the decision to venture into Sabah should be discussed by the Council as agreed by Prime Minister Dr Mahathir Mohamad himself.

Hmmmm....Guan Eng telling Dr Mahathir what the handsome old man should and should't do.

And he sounds upset. 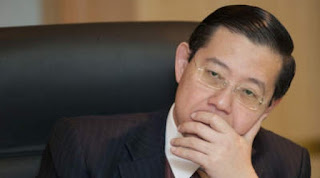 I think he is begining to realise that Dr Mahathir is not exactly going to let DAP control him.

Guan Eng and gang must have thought that Pribumi Bersatu having so few seats in parliament will be easy to manipulate, especially in breaking up the Malay/bumiputera majority power.

They must have want it to remain that way.

Pribumi Bersatu with Dr Mahathir at its helm is more effective as a stooge for that purpose than Amanah or even Pas during the Pakatan Rakyat days.

I believe that's why Guan Eng doesn't want Pribumi Bersatu to be stronger by way of absorbing the Umno turncoats or expanding to Sabah.

Well, I don't think Dr Mahathir really care about all that.

After almost a year in power now, he too probably realised that DAP, PKR, Amanah and Warisan are actually quite useless as a government.

The signs are all there to see now with all sort of councils being set up every now and then to manage the country where the Cabinet can't.

Dr Mahathir knows that he needs to strengthen Pribumi Bersatu to survive at least the coming four years before the next general election.

Otherwise, he and his party will diminish to nothing.

They said a person will be most remembered by what he/she is at the end.

I don't think Dr Mahathir wants to be remembered in Malaysian history as a leader of a small Malay party which abides by the wishes of someone like Guan Eng.
Posted by Annie at 10:19