Got a call from a friend over this issue yesterday evening.

He said he read this post and wanted to express his unhappiness with the proposed anti-fake news law.

My friend is actually pro-BN.

He said introducing such a law so close to the general election was wrong as it could backfire badly on BN.

"It will give ammo to the opposition for their campaign. No one likes to have his freedom restricted in any way. This is especially so among the young people," he said.

My friend is not trained in law like me but he has a good read of the law.

He said according to the bill, the law will give the Attorney General the power to decide what are fake news.

"That is bad. People are already complaining about the AG having too much power and here we are giving him even more power," he said.

My friend also suspected that the introduction of the anti-fake news law is just a continuation of the proxy war between factions in Najib's camp.

He said this part of the proposed law was likely designed to cut down to size members of a faction who have been using a prominent blogger based in UK to attack their rivals,

It covers all mediums and extends to even foreigners outside Malaysia as long as Malaysia or its citizens are affected.

Well, my friend does have a point there.

That part of the bill does look kinda weird.

By the way, I also found that many people are saying this about this issue;


“Minister of Communications and Multimedia Datuk Seri Dr. Salleh Said Keruak should consider having a special committee comprising journalists and communication experts to study every fake news case. Get an ex-judge to chair the committee,” suggested Ahirudin.
“This special committee, if you ask me, should not have any politician on board. None. Not even ex-politicians,” he said.
ORIGINAL POST

This is an Associate Press story picked by Wichita Eagle, a US publication;

10 years in jail for fake news


The anti-fake news bill, which must be approved by parliament, calls for penalizing those who create, offer, circulate, print or publish fake news or publications containing fake news with a 10-year jail term, a fine of up to 500,000 ringgit ($128,000) or both.
The bill defines fake news as "any news, information, data and reports which is, or are, wholly or partly false whether in the form of features, visuals or audio recordings or in any other form capable of suggesting words or ideas." It covers all mediums and extends to even foreigners outside Malaysia as long as Malaysia or its citizens are affected.


Read more here: https://www.kansas.com/news/business/article206808879.html#storylink=cpy
The writer of the report is Eileen Ng. She used to be with NST, The Star and the now closed Malaysian Insider.

Used to be chummy with her, but we haven't seen each other for quite a while. Glad to know that she's with AP now.

Well, if you click on the link above and read the entire report, you may find that it's quite slanted to the opposition's side.

As for the opposition, they are meant to oppose this sort of things.

So, I'm not surprised that they are against this proposed law.

Actually, I'm also against any new legislation which further restricts freedom of speech and had feared the worst when the government said it's going to introduce this anti-fake news law.

However, I have seen the content of the bill for the law which was forwarded to me by a friend and have to say that it's not as bad as I had feared.

It's not like detention without trail for those suspected of writing fake news or something sinister like that.

To make it simple, I don't think I have to be scared of this law if I don't write anything fake.

It's nothing really new from the existing laws on the matter, actually.

Basically, it just said don't write or spread fake news or you go to jail or fined heavily.

I'm fine with that because I don't do this fake news business in the first place.

I always try my best to check the facts first before writing something serious.

If I'm not sure about something, I don't write about it.

That would be the best.

Of course, the government guys shouldn't go around telling people that everything that is not coming from them are fake news.

By the way, we need to also realise that the authorities need to similarly make sure a fake news is genuinely fake, before charging its author under such a law.

They can't simply simply charge people on this one, okay.

And if the mainstream media publish or broadcast fake news, they can also be charged under the proposed law. 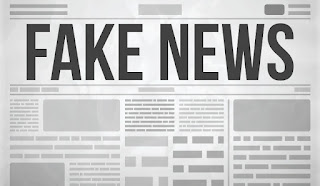 You all who are unhappy with newspapers and television stations should keep a look out and lodge a report to the police or MCMC every time they publish or broadcast anything that could be fake news.

That would be fun, I think.

Whatever it is, I didn't see any provision in the proposed law which will make it very easy for the authorities to penalise people, what more if the person involved was innocent.

So, don't be too scared.

Bottom line is, just don't write or share things that we are not sure of.

We are after all responsible for what we tell others.