Shady and dodgy frontmen of BN

One of the most stupid and irritating tactic employed by Barisan Nasional in the run up to the 13th General Election last year was using dubious characters and NGOs to issue statements against Pakatan.

I mean, what were the brilliant minds manning the BN and Umno war rooms were thinking?

Do they expect people to suddenly hate Pakatan when they hear pronouncements about how bad the opposition coalition was by the likes of Zamil Ibrahim, the guy who was described as former Parti Kesejahteraan Insan Tanah Air (Kita) chairman?

The former Kedah PKR Youth chief is as dubious as one can get. I mean he is a former this and a former that, so, what is he actually? Dia ni cari makan kerja apa?

And then there were all those wonky and dodgy NGOs supposedly headed by equally shady characters giving support to BN and whacking Pakatan.

Don't tell me the BN or Umno war room people don't know about these people and have nothing to do with them. Come on la, people are not all stupid.

He is one example :

I was like...what the hell are all those expensive consultants, advisers and aides doing?

Is that even supposed to be funny?

Don't they realize that this sorts of stupidity costs BN dearly in terms of credibility.

If I am with Pakatan, I would just point at the stinking reputation of the characters and told others, "Hey, that's BN for you."

And actually, that's what the Pakatan people did and their counter measure works beautifully for them.

Just look at how immune were the Pakatan leaders to personal attacks even when the public was presented with all those sex videos.

People just don't give it a shit because the ones presenting those videos were also characters of highly dubious variety.

Now, what made me so frustrated about the whole thing was that, the BN is still happily employing all these people the way they were after the less than stellar performance of BN in GE13.

It clearly shows that the BN or Umno planners have not even bothered to think.

Ya, that's my words.

So, I just look and shake my head in disbelief whenever one of those characters appeared in the newspapers making statements against Pakatan.

That's how after a while they became the face of BN and Umno and everything that were wrong with the establishment.

The latest was when Senator Datuk Solaimalai Nallakaruppan, announced that he wants to contest against DS Anwar Ibrahim in the Kajang by-election. 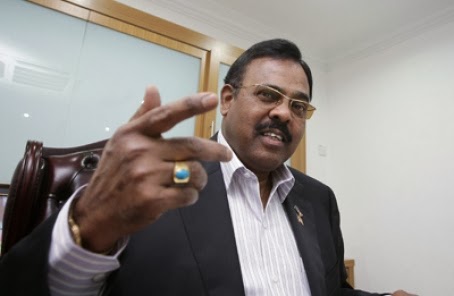 I'm quite sure this one is the work of those geniuses in the Umno war room.

They must be thinking the people will go like this :

While in actual fact, people are probably saying this :

"What the fuck the BN people think we were? They think putting that dirty pimp against Anwar will make us love BN? Fuck BN man."

Seriously, that's the way I think it's going to be.

And seriously, making someone like that a senator and given the title Datuk....what the fffff.....

If BN decides to fight it out, why can't they just let MCA handle it since Kajang has always been an MCA seat?

It is after all the first real test for MCA since DS Liow Tiong Lai took over the party leadership.

Let's see if there is any sign of the party regaining their support among the Chinese who made up about 40 per cent of the Kajang constituents.

Even if MCA loses, if it handles itself well during the by-election, the party may regain some respect and probably support from the community it supposed to represent.

Well, I don't think this message will reach the advisers, consultants and aides.

My opinion is that they will continue with the stupidity all the way to GE14. Shooting their own feet and those of DS Najib Razak.

I'm writing this just to vent my frustration.

I know that I will probably be labelled as one of those rebel pro-establishment bloggers for pointing out their stupidity. But what the heck, I think any rational observer would agree with me.

There must be a more intelligent tactic than this nonsense currently used by BN and Umno.
Posted by Annie at 12:05