Not so hot for Undi18

I wouldn't say that I'm against the Undi18 thing but I'm definitely not in favour of this country's fate being decided by persons who have yet able to survive in the world without the help of their parents.

Sorry kids, I don't really like the decision of those among you who still need to ask someone for money to buy their underwear to affect my life.

Seriously, I think those who are to be allowed to vote should not be because of their age but rather their ability to understand real life in real world.

If a kid is 15 but has worked to help support his/her family because of poverty or something, then by all means, let him/her vote.

Such a kid, I think deserves to vote more than an adult who never really know the harsh reality of life because of their privileged position in life.

Even more so compared to 18-year-olds who have yet to get a real taste of life.

Now we even have kids running for public office, thinking they know better about what the general public needs.

In Melaka, the press has started to highlight such a candidate;

But I think she should at least finishes college and works for a while first before running for public office.

I mean, get a taste of the real life before deciding she can represent others.

Anyway, after saying all that, I would say that I will nonetheless vote for her if her opponent is a worse choice to represent me...like that Melaka Umno boss Rauf.

At least the girl looks nicer and most probably wouldn't do too much damage. 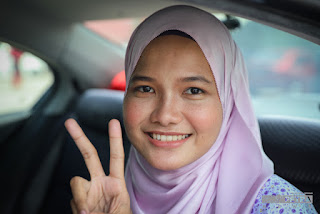 I just hope that she wouldn't be as irritating as Syed Saddiq if she gets elected.
As for the other kids who will soon be voting, I hope they at least know how to take care of themselves first.
Okay, no need for them to work first or anything like that but they should know how to clean up their rooms, wash their own clothes and not being too much of a nuisance for their parents.
The mat rempit and posh Bangsar-type kids shouldn't think about voting,  I hope.
Posted by Annie at 11:03