I actually have only one wish about the coming Melaka election, that is for Umno to lose in Tanjong Bidara.

It's because of this report,

Yup, I don't like that Rauf guy very much.

As I previously wrote, the whole state election nonsense is because of the power struggle between him and his opponents in Melaka Umno.

Now he is eying the safest BN's seat to contest.

Constituents of Tanjong Bidara are 93 per cent Malays, who are mostly fishermen and odd job workers.

BN's Umno candidate won the seat with the highest majority percentage in Melaka in 2018.

I know, considering all that, Rauf will be almost  unbeatable if he's really fielded there.

And once he wins that seat, he'll be the new ruler of Melaka....of course, provided that BN actually wins the whole state election.

With Pakatan struggling to get its act together for the election and Perikatan being as stupid as always with its Malay Islamic supremacy agenda, BN stands a good chance of winning,

And with that Rauf will get his wish.

Bear in mind ya, Melaka people are about 68 per cent Malays.

Now, I don't really mind BN winning the state election but the thought of Rauf lording over the land because of that, really put me off.

That is why I'm hoping (against all hopes) that he will be defeated in Tanjong Bidara.

From what I heard, Pribumi Bersatu will be fielding Masjid Tanah MP Mas Ermieyati Samsuddin there. 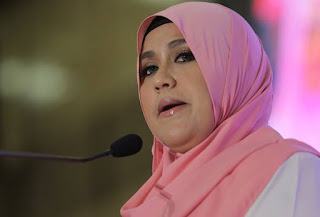 She was the Umno Puteri chief before defecting not long after GE14.

I was told that she bailed out of Umno because of a quarrel with Rauf, the same as the others who were sacked that day.

If it's true, then I don't blame her. I would quit too if I'm forced to kowtow to that Rauf guy.

I bet she must had volunteered for the seemingly impossible mission.

And I hope she will somehow wins.

Umno really needs to get rid of its bad leaders,