What has race got to do with being AG?

Thomas pointed out that he had worked for the PAS government as a legal adviser and for Malay institutions and they had never had an issue with him being around.

“When that appointment (as legal adviser to the Kelantan PAS government) took place, I stayed on as their lawyer, they did not take into account racial considerations. So, to some extent, we thought it would be the same at the public level.

“The lesson has been learnt. I agree with you that the establishment, including the legal establishment, has taken the position that this is a Malay preserve from Merdeka. I accept that,” he said.

Well, Tommy was basically saying that people were against him being appointed as the AG because of his race and that those who criticised his actions as the AG are racists. 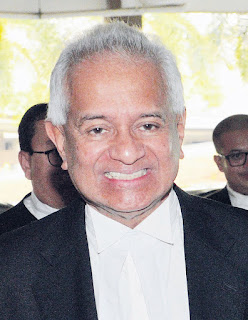 Actually Tommy, people were against you being an AG because of this sort of things,

MACC gave Tommy Thomas 681 names to be charged in the 1MDB case but only FOUR went to court. Why?

WHEN TOMMY THOMAS was the Attorney-General, new and smelling likes roses, and the Pakatan Harapan government led by Tun Dr Mahathir Mohamad was in power (and witch-hunting was hot in progress), the Malaysian Anti-Corruption Commission (MACC) offered 861 681 names of individuals and entities to be charged for alleged corruption, alleged money laundering and alleged other crimes related to dethroned PM Najib Razak’s 1MDB.

Tommy Thomas decided, and it would have absolutely nothing to do with selective prosecution or political pressure, if you ask him, to charge only FOUR.

Yes Tommy, it's really got little to do with your race.

Instead, it's because of your actions, which were tainted by partisan politics.

Remember all those charges against Pakatan people that you dropped when you were the AG?

It was too obvious, okay.

Especially if your critics were Malays.

It's the very reason why many Malays abandoned the Pakatan bandwagon after GE14.

They now realised that it was all mostly bullshit.

And now that the chips are down, many Pakatan people have started to openly accuse Malays as being racists and insulted them in all kind of manners.

Just look at their social media postings. I gave some examples in previous postings.

And of course that pisses even more Malays, which means that's about it for Pakatan's hope of coming back to power.

You cannot go around calling Malays racists and insult them to win their votes.

They are after all the majority in this country.

What? You are trying to shame them into supporting you?