This is a nice political (or is it gangster?) story,

Knives come out as Penang DCM mulls move to Parliament

There are two rival sides, one aligned to Ramasamy and one said to be led by an ambitious newcomer. DAP insiders who gave FMT the information would not name the newcomer.

Marshel may be facing some legal trouble. Someone has made a statutory declaration saying he was involved in the gruesome slashing of Penang Hindu Endowments Board executive director Ramachandran Muthiah in July.

I always laughed a bit whenever I came across these kind of stories.

These were used to be MIC stories, but now they have apparently moved to DAP.

I wonder how Guan Eng is going to handle this nonsense. Hopefully he won't end up getting beaten up or gruesomely slashed to ribbons in the process.

These people do sound aggressive and dangerous, after all.

And they talked nonsense loudly too....like that Jelutong MP. 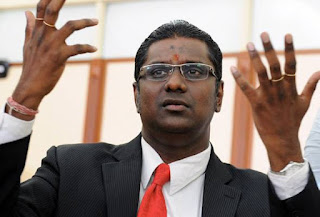 Meanwhile, there's also this story today about a lawyer who think it's wrong to seek justice for Adib and his loved ones;

“Unless there are overwhelming omissions and/or hard evidence of obvious bias, a second follow-up ‘inquest’ and its findings may cause further credibility degradation,” SN Nair said.

He said it also undermined the findings of the original pathologist and the department concerned.

These people are simply too much, if you ask me.

Get to become a lawyer and they think they are so smart already.

It makes my blood boils that they still want to defend those who killed Adib.

For them it's okay to attack firefighters who were trying to do their job and even killing them.

I will never stop praying for those who killed Adib or at least caused his death to be punished.

As for those who defended the act of killing him, may they all rot in hell when the time come.