The laptop that may starve Annie to death

In my last post, which was quite sometime ago, I wrote about difficulties accessing this blog using my laptop.

It turned out that my laptop was the actual cause of the problem.

I could use it for everything else except accessing this blog.

I have tried to fix it but was unsuccessful.

That explains why I have not been writing for quite a while.

So, with a heavy heart, I decided yesterday to buy a new laptop.

Honestly, I don't want to do so because the one I have been using seems perfectly okay, except when it comes to this blog.

Furthermore, I love that laptop. It was a gift from my friend Sufi who bought it for me in early 2012.

It was the only laptop I have ever own.

Yup, I have actually never bought a laptop before.

And now I have to buy one in the middle of the Covid-19 pandemic which has significantly depleted my regular income.

I'm actually now using my savings to top up what I earn every month to make ends meet.

I was hoping I could survive like this for at least a year until the pandemic eases off and things get back to the old normal.

I had done my calculations and by right I could only afford a RM3k+ laptop.

However, I decided that I need something similar to the one I have been using as I don't want to start learning all over again on how to use a new laptop.

So, I went to the computer shop yesterday aiming to buy a RM4k+ laptop which is similar to the one I have been using.

I pointed to the salesman the one that I wanted on display and he went about doing the necessary.

When he asked for my credit card, I just handed it to him and proceeded to punch the numbers to make the purchase.

Then something terrible happened.

The salesman handed me the receipt and to my horror I realised that the laptop that I have purchased was priced at RM5.5k+.

It turned out that there were two versions of the laptop that I pointed at to the salesman.

The salesman thought I wanted the more expensive one. He had shown me the specs, but being an IT idiot, I did not really look at it.

I almost cried when I realised my mistake.

Can't do anything as I have already paid for it.

When I reached home, I just left it in the box as I was still affected by the whole thing.

Oh, on top of the stupid purchase, it turned out that I also have to pay RM800+ for the laptop's three years' warranty. Really crazy.

Now, I have to adjust my finances again. Hopefully, I wouldn't starve to death during this Covid-19 season.

Maybe I should stock up more on Maggi.

Well, nothing much else I could do.

Just now, I decided to unbox the laptop.

I have to do it sooner or later.

And there it is, 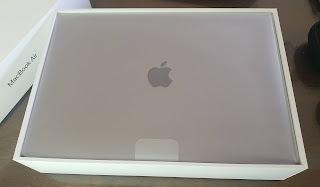 The laptop, which caused me severe depression over the last 24 hours....and probably more after this.
All just because I need to access this blog again.
Sigh.
Posted by Annie at 14:41