Umno can survive without the frogs

Several people who were supposed to be "in the know" told me over the weekend that something is brewing following this news,

They said Pribumi Bersatu will likely increase its MPs by end of this week and because of that Pakatan will have a two third majority in Parliament.

Next is constitutional amendments for electoral boundaries re-delineation and what nots.

Honestly, I don't really give a shit as it's most likely just another baseless rumour anyway.

What's obvious is that the PM succession battle is indeed heating up and the combatants are trying to draw BN (or to be more precise Umno) and its Pas ally to take sides in the fight.

It seemed that both the Dr Mahathir and Anwar camps need to get the growing Umno-Pas initiated Malay Muslim unity movement to support them.

Still, everyone seems to be shying away from the whole thing, as in the case of these two guys,


Of course if indeed Dr Mahathir really wants Malays to unite under Pribumi Bersatu, his invitation was actually directed at Umno.

I'm quite sure it was not meant for Pakatan's Amanah members, PKR Malays and definitely not Pas.

However, I can't see why Umno as a party would want to dissolve itself and get its members to submit themselves under the Pribumi Bersatu leaders.

Based on my observation ever since the GE14 defeat, Umno is still intact at the grassroots level.

The problem is just mostly with its leaders.

It seems that the party can be fixed if it has a good leader at the top as could be seen over the seven months it was helmed by Mat Hassan for the good first half of the year.

It should also be noted that there has been no mass exodus of Umno grassroots members after GE14.

And things seemed to be improving for them, especially after the recent by-election victories. 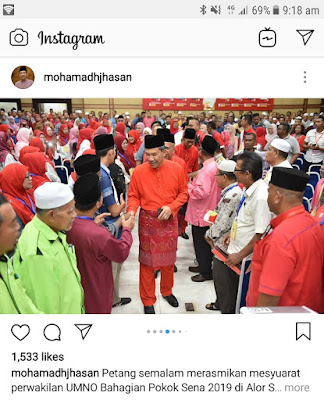 I can see in the picture that Pas people are even attending the Umno division meetings.

So, really, I can't see why Umno needs to close shop and submit itself to Pribumi Bersatu.

All it needs to do is to stay focused on keeping the momentum from the seven months  under Mat Hassan all the way to the next general election.

If Umno grassroots members keep themselves together on this, then I'm quite sure they will be alright.

Well, if some Umno leaders, MPs or assemblymen want to cross over to the other side, then let them do so.

They are probably doing that because they need to cut some deals.

I don't think Umno will die without them anyway.

Just find good replacements for them.

I'm quite sure there are still many good and honest people in Umno to take over from such frogs.
Posted by Annie at 09:44