Been neglecting this blog for quite a while.

Just lazy...well, there was CNY for one thing.

I think I over-celebrated it a bit too much that day.

Otherwise, it's just the usual.

It's nice not to be bothered with the usual politics for a bit.

Last night, I watched the final 54th episode of

The Gentlemen of Wolgyesu Tailor Shop


I like the moral lessons of this family drama.

A bit too long but it was fun to watch.

My favourite characters are the couple Kang Tae-yang (played by Hyun Woo) and Min Hyo-won (played by Lee Se-young). 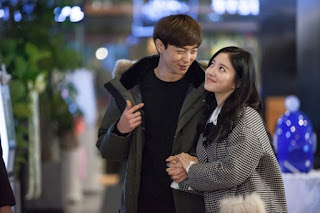 They are not the main characters but I like them the most because they are so positive about life.

I wish I could be positive like them too.

Lots of mushy mushy moments in this drama but I don't mind them so much.

Better watching them than keeping track of the endless Malaysian political nonsense.

Other than watching Korean drama, I also realised these past weeks that I like Shila Amzah very much and I think she's the best Malaysian singer ever.

I know, a lot of people may disagree with me but that's what I think of her after watching almost every other of her videos at YouTube.

I don't think any other Malaysian artiste has such a global impact as her.

It's just too bad that she's under appreciated here.

This is her performance that gave me the goosebumps,

I'll try to write something more serious later as I get back to my usual blogging pace.