A Singaporean friend yesterday asked me whether BN can win the coming GE14 and if so, could it be better than it did the GE13.

Well, I don't think I'm capable of giving a 100 per cent sure answer to that.

I have not done any survey or even been on the ground enough to really know how things are with the real political situation.

So, I did what most others usually do when posed with such a question - I gave my take on it based on what little I saw around me and the political mood of people who are connected to me. 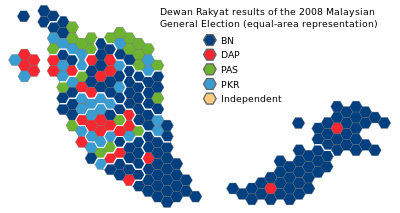 At least the mood seems the same.

At that time, Dr Mahathir was instrumental in causing quite severe damage to the BN led by Pak Lah.

This time though he went a step further by forming Pribumi Bersatu, which aim is not only to oust Najib, but to even defeat BN and Umno altogether.

I'm quite sure now that his effort has managed to take away a sizeable chunk of Malay support from BN.

Among the signs that I personally noticed of this is in the WhatsApp group conversation of my school alumni.

There used to be lively political debates among us in that group but nowadays it's just a one way street going the opposition way.

I used to be among those who passionately argued for BN, but now I just don't bother to do that anymore.

I see no point in doing so anyway because I would most likely be swamped by the others.

Some of those who used to be pro-establishment and argued for it more passionately than me had even switched sides and became ferociously anti-BN.

But then again, almost all of my alumni are middle class Malay professionals and urbanites, a segment of society not known to be too fond of Umno or BN.

Still, the fact that some of us had chose to switch sides to the opposition may reflects on what's happening on the ground.

Back in 2008, some of my pro-establishment friends did the same. They were rebelling against the Pak Lah's administration, particularly the so-called Fourth Floor Boys led by KJ.

It turned out that what's happening among my friends at that time was also happening on the ground.

Somehow I feel that the same thing is going to happen again.

I told my Singaporean friend this.

My instinct says Pakatan is going to retain Penang and Selangor, captures Kedah and maybe Perak as well as more FT parliamentary seats.

They may also capture more parliamentary seats in the other states, particularly those in Johor, Malacca and Negeri Sembilan.

But do bear in mind that these are just how I feel things will be for GE14.

These are purely my guess, okay.

Do excuse me for that because I believe most other people do the same these days when they talk about  politics, especially when it comes to possible outcome of elections.

But of course, many of them tend to present their guess as the real deal.

That's just the way people are.