What some Chinese youths think of Bahasa Malaysia

(Note: Not all the Chinese youths interviewed were educated in Chinese schools)

Yes, I remember that post which was published more than three years ago by my friend Aisya (better known as Ai), who was then the administrator of the blog
BIGCAT

It was in defense of the Chinese schools.

Ai is a strong supporter of PM DS Najib Razak and she was then trying her best to make members of the Chinese community understand that the BN government has no ill intents towards them.

Ai was also trying to tell the Chinese community that they have true friends among the Malays such as herself who was against any attempt to dismantle the Chinese schools system.
She was trying to convince the Chinese that the best for them is to continue with the moderate inter-racial relation approach as promoted by Najib and other moderate Malay leaders.

Unfortunately, the Chinese community broke her heart when they almost as a whole supported the aggressive confrontational inter-racial methods of DAP during the 13th general election in 2013.

Ai, who had to give up managing her blog due to other commitments but still occasionally wrote in my blog after that, totally quit writing after GE13.

It was another case of a Malay moderate being defeated by the Chinese tsunami of GE13.

Ai actually loved the Chinese culture more than myself, who has Chinese blood.

It was just too bad.

Since today is Valentine's day and I am now in the Chinese New Year mood, I decided to reproduce that post by Ai which defended the Chinese schools.

You can also read it at its original link

A message from a Chinese school graduate

whereby you can also read the comments.

The following is an e-mail I received this morning. I post it here for those who do not have the privilege of knowing anyone who had studied in a Chinese school to understand why those schools are close to the Chinese community's heart. 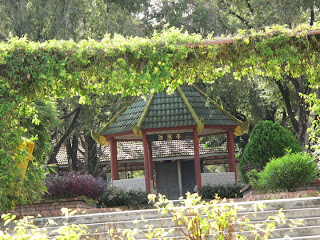 I'm a chinese school graduate all the way from primary school to uni in taiwan. I'm now working for the gomen. Hopefully my experience can help to clear some misconceptions about chinese schools and their graduates.

1. Chinese school graduates are all chinese chauvinists or communists


- saying that is just like saying that all muslims are terrorists. Not true and not fair.

And those rich schools are rich, not because the money falls from the sky or they inherit pots of gold from their ancestors.

Do you know that chinese high schools are registered as non-profit organisations instead of schools? Meaning to say we have to find money to pay for all the opex and capex. The ministry of education doesn't pay for the opex of chinese schools, like how they take care of the national schools. See it this way - chinese schools are NGOs, fund raising is a all year round exercise, just like any other NGOs.

When I was a student many many years ago, we had to help the school to raise funds to pay for the electricity bills, salary of the teachers etc. As students, we would usually go in groups and knock on every single door in town (sometime we will also go outstation), trying to sell the so call "golden brick", which was in fact just a gold colour wooden block, in order to raise some funds to sustain our schools.

The significance of the brick is that every household contributed to the building of the schools, so every brick used in the school actually represents the hard earned money of the contributors - who come from all walk of lives.

If I remember correctly, each brick represents probably an amount of only RM1 to RM5. So if you contribute enough, you probably can have a classroom, a library or a building named after you. That's why you will always see names around in almost every corners of the chinese schools, for these people contributed to building the schools.

This was how, brick by brick, chinese schools were built.

Let me present my mother as a typical example of such contributors. They are not hardcore chauvinist or fervent communist. They are just normal people who feel that chinese school are doing good for the community, so ought to be supported.

My mom was not rich, just like most of the other contributors, most was not rich at all. She was a hawker selling Char Kuey Teow in a small municipal market in a small town in southern johor. The stall had been around for generations. She had on the wall full of thank-you plates from the chinese school because every year, without fail since my grandfather set up the stall decades ago, there would be a day when all business proceeds go to the school. In fact, you will find such thank-you plates all over the hawker centre because almost every stall would do the same, every year. Mind you, these are all small stalls and these people are definitely not rich. Yet they did it happily - I've never heard anyone ever complaint about having to donate money to the chinese schools.

What amazed me most is that some of the stall owners do not have children studying in chinese schools. Most of them sent their children to the so-called gomen schools because chinese schools are deemed as expensive elite education in the community.

To go to chinese high school, parents had to pay about RM20 per month which was considered quite a big sum many years ago. I still remembered when I told my mom that I want to study in Chinese highschool instead of going to gomen secondary school, she just plainly reject me because our family just can't afford it (yet she donated to the school every year!!!). Eventually she let me go because I sat for the entrance examination and won a scholarship to study there - I didn't need to pay school fees for the next six years.

If I may add, my mother didn't just donate to the chinese school, she also pay taxes , all the required bills and also donated to other NGOs including muslim orphanages.

Not true, as not all chinese school graduates have poor command of language - just like not all malays are bad in maths.

I don't speak perfect english with an british accent and people always laugh at my bahasa and say that I'm cina bukit. But I never regret going to chinese school - I'm proud of being one actually - because of the education I received, I am able to have multiple language skills that allows me to communicate with different spectrum of communities in malaysia and of course, I always believe that being exposed in a variety of cultures and traditions make me see things in a more balanced and objective manner, which is a definitely a big plus.

4. Chinese schools destablelise the country and create fractions by segregating the children from young age

Selfish politicians are the main cause of all the above. Pls don't use chinese schools as scapegoat. One school system can't solve the problem if we don't fix the system to provide better quality education - then things will only be worse.

Ok, let's say you put in a one school system and eliminated the chinese school - but the quality of education still as bad, what will happen? Parents will send their kids to private or internationals schools, which is already happening now. So, fix the school system, good quality education will automatically attract the mass. If you were a parent, would you want to spend thousands sending your kids to private schools if the gomen education is just as good, and free! No you won't - only stupid chinese parents will do that to support their beloved chinese schools...