How Anwar can prevent Sheraton Move 2.0

The media has been vigorously highlighting statements that suggest BN will not abandon Anwar's "unity government".

Today they have this one;

The story featured two Umno guys, one of whom was the party's vice-president Khaled Nordin.

Yup, that Khaled, who lost Johor and both that parliament and state seats he contested when he was an MB in 2018, before running off to the BN's safe seat in Kota Tinggi for GE15. 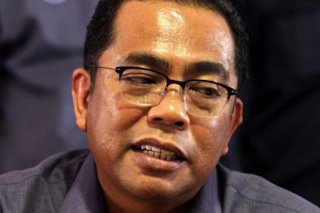 So much for being a vice-president.

The way I see it, Umno is really becoming like a little company dishing out vice-president titles to its Tom, Dick and Harry sales people to make them seem important to potential clients.

Anyway, I believe that Umno leaders such as Khaled really need the party to stay in the unity government to survive the coming party election.

If they don't get to be ministers or deputy ministers, then they would have nothing to show to their supporters.

Well, I don't mind as I also want the government to survive.

As I repeatedly said, we need a government to face the coming global recession. Pakatan or Perikatan, doesn't matter.

We can't afford another ding dong political game for the coming crisis.

So, Anwar better give those Umno leaders their ministerial posts so that they could survive their party election and keep supporting his administration.

Zahid, Tok Mat, Ismail Sabri, Khaled and even that loser Mahdzir Khalid who could be made a senator or something.

Anything, as long as the government survives.

I know, it's hard to swallow, but that's the reality now.

If I have my way, I don't want Umno to even be part of the government as they don't deserve it after their worst defeat in history.

But that's simply not going to be, and I have accepted it.

If those Umno leaders were killed off at their party election, the rebels are almost certain to take the party out of Anwar's government along with their allies in Sabah and Sarawak.

Some argued that would be derhaka to the Agong.

The royalty are after all not suppose to be involved in politics.

The constitution is supreme when it comes to this matter, okay.

If the potential defection gives Perikatan the number in parliament, then Anwar's administration would probably have a shorter life than the short-lived Ismail Sabri's administration.

But that's not even the worst part.

While the wrangling goes on, the recession will set in and the rakyat are the ones to suffer.

I have stopped buying stuff that I don't really need and even getting used to eating Maggi again.

I actually have not been out of the house since GE15 almost two weeks ago.

Need to stretch my savings at least until the worst of the recession is over.