About the highly regarded Chinese newspapers

I was once very close with a reporter of a Chinese newspaper.

She worked for Nanyang Seang Pau and later Sin Chiew.

I asked her why she choose to work for the Chinese newspapers as the pay was quite low at that time, even when compared to the pay of reporters working for Malay and English newspapers. 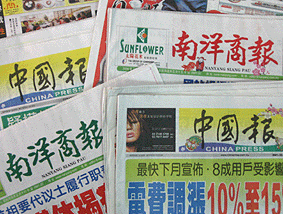 She explained to me that it's because Chinese newspaper reporters are well respected in the Chinese community and that she believes she could do good for them in her role as a journalist.

I actually admired her a lot.

She was very tenacious, hardworking and idealistic.

One may questions why she was specifically focused on her community and not others, but I understand her position because I know where she came from.

Her father was a carpenter while her mother ran a small hawker stall. She studied in a Chinese school and graduated from a Taiwanese university with a degree in education.

Her family was relatively poor and she worked as a waitress for two years after school to save enough money to get enrolled in the Taiwanese university.

There was no government scholarship or PTPTN for her.

She's the one who told me that there are three most highly regarded institutions in her community - their schools, newspapers, and guilds. Those who work for the institutions were respected as they were not paid well, yet still choose to do good for the community with their work.

When I think of it, I really miss our chit chats back then as I learnt a lot from her.

Why I'm writing all these?

It's because I saw this report yesterday,

Judge Datuk Seri Tun Majid Tun Hamzah said in his judgement that the dailies had failed to get Lim’s side of the story before publishing the reports.

The dailies had previously told the court that they had sought Lim’s comment after the articles were published, but he refused to comment.

It was a press conference and the reporters reported what was said by the person who called for it.

Were they committing such a terrible thing for not immediately get Guan Eng's reaction that he has to sue their newspapers?

After all, they did try to get his comment after that.

Not only did he refused to comment but he also slap their newspapers with a legal suit.

Can't he cut them some slack, as I believe that the majority of Chinese newspaper reporters were ardent DAP supporters based on my conversations with them and their writings?

Didn't what they wrote to a certain extent helped DAP won almost total support of the Chinese community in several past general elections?

Let's say Guan Eng or any other DAP leaders called a press conference and accused Najib of being corrupt, should the reporters immediately get Najib's rebuttal before publishing the allegations? What if Najib was purposely not available that day? Should they kill the story because of that? Should Najib then sue their newspapers because they didn't immediately get his comment?

I don't know lah, maybe the attitude of the Chinese community has changed.

Maybe they think Guan Eng did good by suing their newspapers.

Whatever it is, I hope that person who was close to me is not too upset by what happened to her once beloved newspapers.

She probably didn't expect a leader of the party strongly supported by her community is now capable of suing the Chinese newspapers over an error, which in my opinion was not so great.

I hope she's well, where ever she is now.