Debates are just for entertainment

Someone yesterday asked me to comment on the Anwar-Najib debate.

They were just talking and nothing really can come out of talking.

As expected, after the debate those who support Anwar said he was the winner while those who were on Najib's side said their man was the one who won.

It's actually like watching football with no goal posts.

They were just dribbling around with words and got nothing really tangible to show.

If I really want to compare between Anwar and Najib, I rather check their track records on what they had done as leaders.

Just look back at what happened in the country over the past 20 or 30 years and see what those two had been up to.

What were their contributions?

How about you all?

Do you like things after Anwar's Pakatan took over in 2018 or was your life better during BN rule led by Najib nine years before that?

Try to be honest about it and put aside your racial and other prejudices.

Isn't that better than trying to compare those two by their mere words?

I did watch the debate but that was because it's my job to monitor such nonsense.

I really don't feel like commenting on it because I think it would be pointless.

Anyway, someone clever made this and I have to more or less confess that it's basically how I saw the debate went, 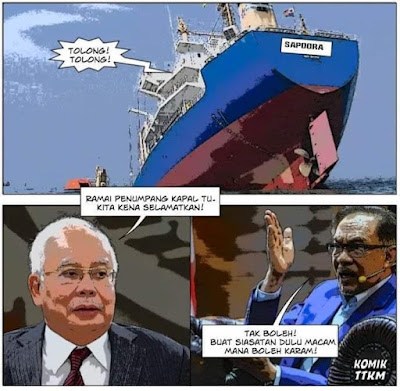 You can change the name of the sinking ship from Sapura to Malaysia if you want.

But, did it change anything?

Then again, that's just me.

I'm not easily impressed by anyone's oratory skills or what they call charismatic persona.

Most conmen have those.

Most leaders in history who were known to give fiery speeches and charismatic are bad or even outright evil.

They were that or later proven to be incompetent as all they were good at was talking.

The good ones were instead almost always those who talked less and instead focused on the works that needed to be done for the people and their country.

I don't know about you all, but if it's up to me, I rather for this country to be led by people who can actually do their job well rather than just talk well.

Well, if you all still like being entertained by the debate, then I hope it's worth your time.

It's pure entertainment and that's about it.

Me, I rather spend my time for that watching a good standup by Dave Chappelle or Bill Burr.

At least I can get a proper good laugh that way.