Someone recommended me to follow this podcast by The Vibes gang;

The Good, the Bad and the Ugly

So I did and found that it's not such a bad effort at trying to present a balanced platform on current issues.

I know those three guys featured in the podcast. 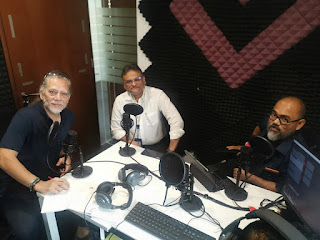 All "supposedly" because I'm actually not totally sure what are their respective current political affiliation.

Basically, I'm just assuming from what I know of them in the past.

I'm also not sure who is the good, the bad or the ugly, as all of them looked ugly to me.

Well, I think the podcast's title refers more to the issues that they are discussing. Some are good, some are bad and some are ugly.

I didn't expect from the start that those three will fight each other over the issues and true enough, yesterday they discussed things nicely as if they were lepaking at a cafe somewhere in Bangsar.

So, if you all prefer to listen to people screaming at each other like in the Dewan Rakyat, then I believe the podcast is not going to be your cup of tea.

It's more for the more civilised crowd who can mix around despite their political differences...something like those three guys.

I listened to the whole thing yesterday, and it was quite okay.

I didn't fully agree with the opinion of those three, but since they argued their case rather nicely, I didn't feel like whacking them in the comments.

Anyway, it was actually the first time that I  listened to a podcast session from start to finish.

You all should give it a try, sometimes.

Don't actually feel like writing much as I'm already in raya mood.

Got to go help make pineapple tarts in the kitchen now.