About the nonsense in Melaka (updated)

Just shortly after I did this post, Rauf announced that

Friends who know Melaka politics more than me said the reason for the ongoing nonsense there was this guy; 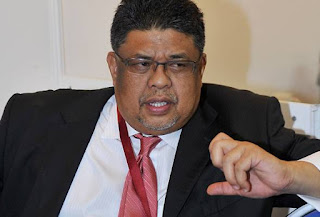 This Rauf guy is the Melaka Umno chief, appointed by party president Zahid after BN's defeat in GE14. He is also currently the Melaka state assembly speaker.

He was formerly the party's executive secretary when Umno was led by Najib.

My friends said the Umno assemblymen and their gang who decided to withdraw support from the BN's Melaka CM did so because they can't stand Rauf's meddling in the state administration.

Well, if it's true, then I really don't blame them for doing so.

In fact I wrote quite a lot of criticisms against him back then when he was running the show at Umno's headquarters.

I actually started to dislike him during the run-up to the Tenang by-election in 2011.

As the party's executive secretary at that time, he tried to force Johor Umno to submit to him in the handling of the by-election campaign.

Those days, Umno's typical by-election campaign involved a lot of circus-like nonsense which allowed certain individuals making lots of money from renting out equipment and other non-essentials.

After the BN's victory in that by-election, an unhappy Rauf caused Johor Umno war room director to be barred from attending meetings at the party's headquarters, giving the excuse that the guy was not a division chief like his peers from other states.

I was based in Johor at that time and when I heard about what happened, I told myself that this Rauf guy is bad for Umno.

There were other incidents after that which reenforce my negative view of the guy.

As I had previously written, Umno has these sort of people to blame for its defeat in 2018.

People are simply fed up with their ugly faces and antics.

That's why I was very disappointed when Rauf and other Umno leaders whom in my opinion caused BN's defeat were once again given senior posts after GE14.

How can a party's executive secretary like Rauf ,who failed in GE14 be given the post of a state chief was beyond me.

So, I was not actually surprised when my friends told me that the guy is back doing his old tricks again, causing havoc within the Melaka Umno rank.

It must be really bad, I think.

Well, if I'm Zahid, I would think of a way to remedy the situation instead of calling for a snap poll yesterday as the Covid crisis is not yet over.

Of course, in the first place i wouldn't appoint someone like Rauf to lead Melaka Umno as his face alone could cause defeat in the state in the next general election.

If I'm the Umno president, I would make sure all the party's state chiefs are handsome, capable and most importantly sincere leaders.