Can they just shut up and disappear?

Saw this one just now and I was like "Yuck, this one still around and making noises?"

The Jelebu Bersatu chief said the two parties should not cut ties completely, and expressed hope that both will continue to work together.

This Rais Yatim is one of the most icky politicians as far as I'm concerned.

Been around for so long that I wonder why people are so easily conned by him.

He even thrived and became minister again during Najib's time until he fucked up big time and was sidelined. 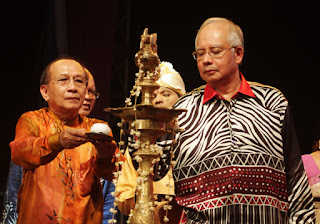 Then he turned against Najib.
Typical.
Well, that's Najib's fault for surrounding himself with people like Rais. He's a poor judge of character.
Anyway, what is this Rais talking about saving "Malay politics"?
So dumb.
No politics needs saving at this time. In fact, less politics would be better.
It's the rakyat that need saving. They need to be saved from unemployment, corrupt people in power etc etc.
It really irritates me seeing him invoking the word "Malay" like that.
This guy is actually desperate as he knows that without Umno supporting Perikatan, Pribumi Bersatu which is his ship now will sink.
He can't jump back to Umno because he had done all the jumping that he could and Umno people must surely still remember how cocky he and the other turncoats were right after GE14.
Why can't people like Rais just shut up and disappear?
Then there's this one,
Put aside leaders with criminal charges to move forward, Musa urges Umno
Duhhh...this Musa Hitam is still around too?
And now suddenly making an appearance  giving Umno an advice which is soo obvious.
Yeah, that's a good advise but coming from him made me cringed.
Where was Musa back then when everyone said Umno is dead post GE14?
He had a cushy lucrative job (if you can call it a job) at the Sime Darby Foundation at that time and I was told that he refused to go anywhere near Umno, let alone lending a helping hand to save it.
Now he's dishing it advice and talk like this,
excerpts;

In the interview, Musa also explained that severe infighting within Umno has caused the party to be splintered into three factions.

One faction he described as Umno puritans who believe in the spirit of the party, the second faction are those who side with the party leaders such as its current president Datuk Seri Ahmad Zahid Hamid, and the third consists of capable leaders that were not given the opportunities to step forward.

Yeah, right.
As if he now suddenly knows Umno inside out again.
Eh, does he ever goes down on the ground and talk with the real Umno grassroots (I'm not talking about the ketua2 bahagian, okay)?
Does he knows that the Umno grassroots is still very strong, even when everyone said it's dead after GE14 and people like him abandoned the party and people like Rais betrayed it?
Whatever lah.
You see, that's why I'm feeling quite fed up these days.

I keep bumping into stories of useless people making useless statements quite a lot of late.