I have been following closely the ongoing DAP's state elections.

That's because the party, which is now the single biggest block in parliament with 44 seats was said to be mulling the possibility of forming an alliance or cooperation with arch enemy Umno in the next general election.

I wanted to know if such thing is possible.

Is DAP really changing for such a possibility?

Or is it, like Umno is being stubborn when it comes to change.

Hard to tell so far.

Guan Eng in his speech at the Penang DAP convention said there will be no such cooperation...but he added that the stand is until the central executive committee of the party decides otherwise.

That means, the possibility is still there.

Well, the Penang DAP election yesterday turned out as expected.

Guan Eng's sister also retained her post in the state party committee.
So, the family cartel continues.
I was also a bit disheartened because the only Malay, who was elected yesterday was Zairil Khir Johari. 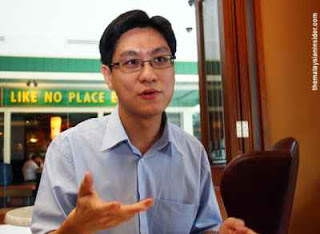 I'm sorry to say that electing Zairil was actually a poor choice if the DAP delegates thought that would add some Malay flavour to their line up of leadership.
Zairil's past conducts were not really very good examples for a Malay person. He doesn't even look like one.
Well, I don't want to go too much into that personal side of Zairil as you all can just google to find out what he was all about.
I'm not saying here that DAP is anti-Malay or anything like that but the outcome of yesterday's polls doesn't look very good with the multi-racial image that the party is trying to project.
It now looks more like a party for non-Malays more than anything else.
I know, I know, they said DAP is all about merit but surely there must be a good DAP Malay person who is really better than Zairil to be elected, right?
They can't all be bad, right?
Or are they all the same as Zairil?
Sigh.
Anyway, after the election, they appointed Syerleena Abdul Rashid, the Seri Delima assemblyman to sit in the Penang DAP committee. 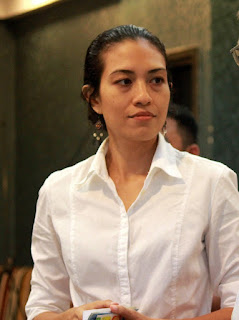 She didn't even contest the election, probably knowing that she wouldn't make the cut anyway. At least that's my thought.
They made her the assistant publicity secretary.
I think that's a convenient post for a Malay in DAP as she probably could do more publicity to convince for more of her fellow Malays to join or support the party.
No real decision making power for her though.
By the way, Syerleena's Seri Delima constituents are made of 65.54 per cent Chinese, 22.31 per cent Malays, 11.39 per cent Indians, and less than one per cent of other races.
Yup, it would be better if she had won in a real Malay majority or at least a marginal constituency.
Whatever it is, I think DAP still needs to do more in order to properly portray itself as a party for all, especially among the Malays.
Posted by Annie at 12:12