A journalist friend yesterday requested for me to write a bit about the recent problem that Mat Sabu had with a delayed Malaysia Airlines flight.

He said I should write one because I used to work for an airline.

I told him that he was being slow because everyone has already talked about it such as reported here;


After all, Mat Sabu is an ass. It should be expected that he does such stupid things. Well, you all voted for an ass, you get an ass minister.

It's actually just a case of poor time management and terrible public relation on his part. You are meeting the PM in London, go la earlier to avoid risk such as flight delay. Then made so much noise some more. Really stupid.

But I told my friend that I can write about flight delay because I did work for an airline several years ago.

No, I was not an air stewardess. I did go for an interview once but didn't get the job. Most likely because I'm not pretty enough for it.

I actually worked in a hangar. Engineering department.

So, I know quite a bit about aircraft and what it takes to make them fly.

One thing for sure, you can't cut corners when it comes to aircraft. Doesn't matter whether an aircraft belongs to a normal or budget airline, it must be treated with the same high level of care. Everything about them must be exactly as it should be. The rules are stringent.

One thing that surprised me when I first started working at that hangar back then was that I discovered that an aircraft is actually made of quite light and fragile materials. They have to make it light yet sturdy enough not to fall apart while flying thousands of metres in the sky. With that, you can't afford a single mistake in it's care.

It's the only way to ensure safety which is paramount for any airline.

Knowing all that, it's easier for me to understand when told that my flight has been delayed. You can't rush an aircraft and I understand that a delay is almost always unavoidable and for good reasons.

Yet, throughout the years of flying around, I hardly experienced much flight delay. I think this applies to most people and that's why they can't take it when they were delayed once in a while.

For me, the only significant one was when I went for a holiday in Japan in autumn 2015. It was a Malaysia Airlines flight from KLIA to Kansai Airport in Osaka which was supposed to take off just before midnight but only managed to do so about 4am.

The passengers were only informed about it as they were waiting at the departure lounge, probably due to a sudden problem detected with the aircraft.

There were many angry passengers  complaining loudly about the delay but I noticed that they were all Malaysians. None of the Japanese passengers complained too much, as somehow they seemed to understand better when the Malaysia Airlines staff told them about the necessary delay.

Somehow, that trip was jinxed for me. The flight back to Malaysia a week later was delayed for a good 12 hours. But the good thing was that, I was informed beforehand of the delay so that I didn't waste my time too much waiting like stupid at the airport. By the way, Kansai Airport is the best - it even have a very spacious smoking room.

Other than that trip, my flights were almost always on time.

Some people complained about budget airlines being always delayed, but I honestly don't have much such complaint either.

I know that the other day the Tony guy of AirAsia said his planes are often on time, causing him to kena whacked by many people. But really guys, I don't have any problem the few times I flew with that budget airline.

The way I see it, maybe there were delays here and there but most of the time, things are okay. And also, those who were delayed naturally complain, while the majority who are on time don't say anything.

Well, even if I later on experience flight delay with the budget airline, I wouldn't want to complain too much just the same I always do with Malaysia Airlines ,which I mostly flew with.

Again, the delays are most likely necessary to ensure our flights are safe. At least that's how I see it. 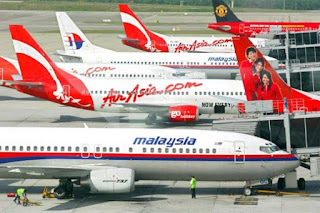 My journalist friend who asked me to do this posting also requested for me to highlight reasons for flight delay which were beyond the control of airlines. He gave me a list drafted after talking with people in the airline business.

Weather conditions that is declared unsafe for an aircraft to fly for safety reason.

Air traffic congestion at certain times of the day where there are too many flights taking off and landing at the same time. So the Air Traffic Control(ATC) that manages the air traffic by scheduling the take-off and landing of an aircraft schedules the process accordingly-which ends up in delay because of the high volume.

Ground congestion- once the aircraft is fully boarded and ready to depart the captain has to wait for his turn to taxi out when there are too many aircraft at the same time.
- Many occasions passengers will have to endure long queues at Immigration and the aviation security (AVSEC) area because there are insufficient counters to service the load of passengers. (peak hours)
- After all the security checks, it doesn’t help where passengers will have to take extremely long walks before they reach their boarding gates.
- If the passengers who have already checked-in and their luggage and it has been loaded on the aircraft and they are unable to make it on time to board the aircraft- before they are offloaded- their luggage has to be traced and removed. A list of paperwork must also be completed for this reason. In such situations, the delay can take up to 30 minutes.
- There are times, when passengers load things they are not supposed to carry in their check-in luggage and it has to be removed. That can cause a snowball effect where other flights can be delayed because of this incident.
- There are situations where there are disruptive passengers at the boarding area that needs to be dealt with and automatically affects other passengers boarding.
- The terminal design with congested space makes boarding even more slower.

So guys, in case you experience flight delay in future, do be calm about it.

I know it's frustrating but it's delayed for our own safety or due to unavoidable problems.

Try to be cool about it and not be like Mat Sabu, okay.

After all, most flights are on time. Really.
Posted by Annie at 10:57