An advice and a bit about water

A friend told me last night that he doesn't think Umno and its allies, including Pas, can wrest back Putrajaya in the next general election.

That despite all the troubles currently faced by Pakatan.

My friend used to be a staunch Umno supporter and the last time I checked, he was still a party member.

He was not even impressed with the BN's recent by-election victories in Cameron Highlands, Semenyih and Rantau.

His reason was that he can't see much change in Umno from the pre-GE14 defeat last year.

However, he admitted that he has not been following the political development closely since GE13 and even more so after the BN's defeat.

So, I told him that I still take the trouble of going on the ground whenever I could and from my observation, there is a chance that Umno and gang may win the next general election.

I was actually of the same opinion as my friend just a few months ago.

I also thought that Umno was stuck and not likely able to change much.

Basically, I thought Umno was dying a slow death.

Then came Mat Hassan to take over the lead from Zahid, who was facing legal problems. 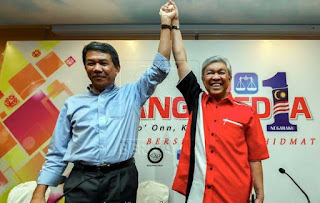 And things began to change.

It's all there to be seen during those by-elections.

That's when I began to believe that it's not yet the end of Umno, BN and now their new friend Pas.

Okay, I still don't like Pas too much but since they were willing to meet Umno and BN halfway, then I should do the same with accepting them as friends.

If DAP can did that during the Pakatan Rakyat days, why not me, right?

Actually, I'm also not a big fan of Mat Hassan and has never really care for him before this.

But if he can make the necessary changes, then why not support him, right?

What ever it is, we still need a good and strong opposition, especially now that we know how useless the Pakatan government can be.

Just look at the sad state of the economy, broken election promises, stupid and arrogant ministers, rude and racist attempts to change the constitution as well as the Pakatan's ever worsening internal bickering.

I told my friend that even some of the intolerable Umno personalities such as Ahmad Maslan and Shahidan Kassim nowadays looked not so bad compared to some of their Pakatan counterparts.

But of course he was right, Umno needs the necessary changes.

I told him to give Mat Hassan a chance and not give up.

That's before we ended our teh tarik session last night.

Anyway, I woke up early this morning and discovered that there's no water supply at home.

A quick check and I found this story;


It's the recurring pollution story again.

And in Klang there were several burst pipe incidents over the past weeks, causing days of no water supply in large areas.

Maybe for next election they can consider promising uninterrupted water supply instead of some free water in Selangor.

Free also no point if there's no water.

Well, at least no school kids were hospitalised like in the recurring air pollution incident in Pasir Gudang, Johor.

And as usual these days, the authorities were not really sure why all these were happening.

Minister Bee Yin, you so busy with plastic bags and such, how about this air pollution hazard?

I think poisonous air will kill us first before the plastic bags can strangle us.

But then again, this is Malaysia Baru....well, never mind, okay.

I'm just hoping that I could take a shower when I come home later.
Posted by Annie at 15:56