Singapore PM’s siblings say they feel threatened, have lost confidence in him


At the heart of the family dispute is the future of the house in which their father, Lee Kuan Yew, lived for most of his life. He was the first Prime Minister of Singapore and ruled the country for three decades.
Lee died in 2015, and according to the younger siblings wanted the home demolished rather than turned into a monument. They claim that the prime minister and his wife, Ho Ching, had opposed this wish.
The younger siblings accused the prime minister of wanting to milk Lee Kuan Yew’s legacy for their own political purposes. They said that they believed the prime minister and his wife, Ho Ching, harbour political ambitions for their son, Li Hongyi.
All that are very unfortunate, isn't it?

I wondered but not dare to speculate what actually happened between the siblings.

It's hard for me to believe that Lee Hsien Loong is as bad as what his brother and sister said.

The guy is so nice and gentle.

Anyway, I felt that the whole matter may be too private for me to comment.

It's after all a family matter.

I actually began to admire the Lee family after learning more about them after Lee Kuan Yew's death. 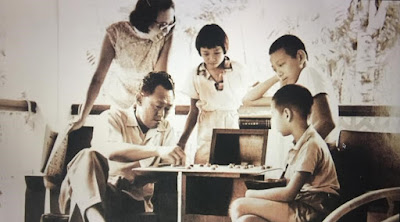 Whatever it is, I hope they could resolve their family problems soon.

It's always sad to see a family breaking up.

Here's some  old posts that I did about them,

And here's what Lee Hsien Loong said about his father after LKY passed away,