There was a bit of political discussion when I was berHari Raya at my uncle's place earlier in the day.

Some of my father's siblings are pro-opposition while others are pro-BN.

My father had initially wanted us to go to his sister's place but everyone in the family turned out to have gathered at my uncle's place.

I have to admit that I was guilty for starting the political discussion, which at a point got a bit heated.

I had asked my uncle how it has been since he jumped ship from Pas to Amanah.

It got heated when the name of Amanah president Mat Sabu was mentioned.

It turns out that one of my aunts can't even stand the mention of Mat Sabu's name due to a personal bad experience of him several years ago.

Knowing my aunt, I knew that she didn't lie about her experience.  She's the most truthful person that I have ever known.

Furthermore, I always think that Mat Sabu is not exactly the most gentlemanly or refined man.

"It baffles me how anyone can support a party led by such an immoral person," said my visibly angry aunt.

Otherwise it wouldn't be much of a Hari Raya family gathering for us today.

My father scolded me later for starting the whole thing.

Well, sometimes I forgot how passionate people can get when it comes to politics.

Whatever it is, Mat Sabu is indeed a liability for Amanah.

Nobody can take the party seriously with someone like him at the helm of it.

The guy has been clowning around too much for too long. 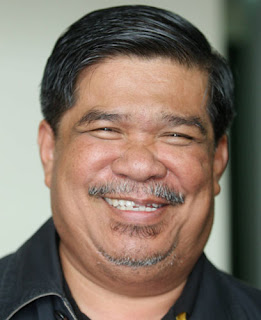 Too bad for Amanah, as they are stuck with him.

I think the party will not get far after the next general election just because of him.