Comedy clubs are not funny

I believe most of you have known by now about the not funny strip tease comedy at TTDI the other day. 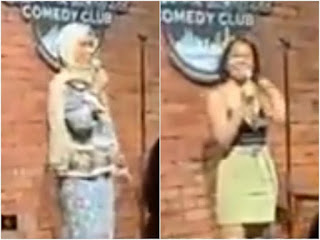 The woman who did it is now in police custody and the venue where it happened had temporarily been banned by City Hall.

The woman clearly has no excuse for doing what she did.

The Crackhouse Comedy Club however has plenty of excuses and those who supported it.

There were Harith Iskandar, Afdlin Shauki and this one,

The entertainment venue explained that this is because open mic provides everyone and anyone the opportunity to perform their respective acts, and it is nearly impossible for the organisers to predict what the artist would say or do.

So, if someone opens a venue as a platform for others to say whatever hell they want to say, then that someone is not responsible for what's being said, right?

Hey, even printers are held responsible for printing offensive stuff. They cannot argue that they were just printing the stuff ordered by their client.

Anyway, who gives these so called comedy clubs the right to use their venues as platforms for people to say anything they want.

Don't they know there are laws against saying certain things in this country, even if they were meant to be comedy?

I suspect that the strip tease incident was not the first offensive nonsense that happened at the club.

It's just that one got caught on video.

Otherwise, it would have been all okay.

The crowd was clearly enjoying the "comedy" with cheers and clapping.

Nothing is more pleasing for them then seeing a self-confessed Muslim insulting Islam.

Personally, I have never think much of Malaysian comedians. Never found any of them to be really funny.

That includes Harith and Afdlin.