Just got back yesterday from a bit of holidaying in Sabah.

Quite a pleasant trip, actually.

It was so pleasant that I had not bothered to keep up with the political happenings in the country this past week.

What's there to keep up with anyway other than the usual nonsense.

Just look at the PKR election. Was it worth monitoring?

Isn't it just the usual merry go round of a party which has lost all sense of significance?

The election process of the party itself was a joke.

One election, three winners - the joke about Ampang’s PKR election

And yesterday, Anwar appointed some of the losers to key party posts.

Some said it's to balance the influence of his new deputy Rafizi.

I don't see why he needed to do that as Rafizi is just a clown.

Aren't you all tired of such politicians, who could only talk nonsense and not much else?

Seriously, PKR is just a circus full of clowns like Rafizi and I just can't wait to see it get thrashed in the next general election.

Anyway, I met Joniston Bangkuai of PBS when I was in Sabah. 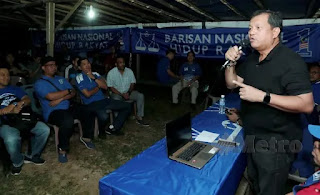 Went to his beautiful kampung in Kiulu, actually.

The guy is down to earth, know how to articulate things properly, can do his work exceptionally well and as cool as a sea cucumber.

Best of all, I know that the guy is honest and sincere with what he's doing.

You see, I have known Joniston since before he became a politician and we used to spend many hours talking about all kind of stuff, usually after he had a few drinks.

Okay, the guy drinks a bit too much sometimes, but that's normal considering where he comes from.

And he's most honest when he's a bit drunk.

He would tell me all kind of things he wished he could do for his beloved kampung and Sabah.

The guy however doesn't seemed to have any political ambition at that time.

Then things got a bit funny with him when he was conferred with his datukship for his social and charity works, particularly in his capacity as the then president of Sabah journalists' association.

I used to tease him for getting that title and he got quite flustered every time.

I was told by another Sabahan friend that Joniston had even tried to decline the award as he felt he's not worthy of it but was pushed by then CM Musa Aman to accept it.

He would at that time tells me that being a datuk was a bit of a burden as people in his kampung would ask him for help and he can't do much being only a lowly paid journalist.

I only knew that he was with PBS shortly before the 2013 general election when he quit his journalist job after being nominated by the party to contest in his kampung in Kiulu.

He won the seat with a razor thin majority of 44 votes that year but increased it to 1,443 in the difficult 2018 election and maintained about the same majority in the 2020 Sabah election.

Kiulu, which used to be purely an agriculture-based area is now a popular tourist spot where people may enjoy the tranquility and beauty of Sabah rural area or experience the thrill of white water rafting down a river which flows from Mount Kinabalu.

The place, despite categorised as rural, is actually just an hour drive away from Kota Kinabalu.

Joniston had done such a good job at promoting tourism in his constituency and other parts of Sabah that he was appointed as the chairman of Sabah Tourism board and State Assistant Minister of Tourism, Culture and Environment.

I have not met him for quite a few years until a few days ago.

Honestly, I expected him to change now that he's some sort of a big shot politician.

However, I was pleasantly surprised that Joniston turned out to be still the same guy I knew from long ago.

He's still the jovial cool fella who drinks a bit too much when he's lepaking with his friends.

And he seemed still the same honest and sincere guy.

The only criticism I gave him was when I poked his stomach a bit and told him he's getting a bit too fat now.

He just laughed and accused me of also being fat, which is actually quite true too.

It was nice seeing that guy again, but I didn't spend hours talking with him like in the old days as he seemed very busy and most of the time surrounded by people who wanted to be close to him.

Well, that's normal. People tend to want to be close with those who had made good of themselves.

I'm just glad that Joniston is still the same and hopefully he will remain true to himself and continue to do good as a politician and an elected representative who truly works for the people.

We do indeed need more politicians like him instead of those many clowns and crooks who are trying to con us with their sweet bullshit talks.