My beloved was the first to alert me about the shooting of Japanese former prime minister Shinzo Abe yesterday.

I was shocked over what happened.

Who would have ever thought that such thing could happen in Japan these days.

Violent crime there is after all very rare nowadays.

When NHK announced that Abe had succumbed to his injuries, I was surprised that I felt genuine sadness over the news.

After all, Abe was just a foreign leader who has no direct connection with me.

Then again Abe had been around for many years as the Japanese prime minister, and I had grown familiar with his administration's policies.

I particularly applauded his move to strengthen the Japanese military, which many, including those in Japan seen as being too aggressive for that pacifist country.

They always brought up what Japan did during the Second World War.

But that was almost a century ago.

The new Asian bullies now are those communists in Beijing who are threatening Taiwan and claiming almost the entire South and East China Sea.

No other country in this region other than Japan could stand up to them.

But before Abe changed his country's foreign policy, a Japanese soldier serving in an international peacekeeping mission could not even try to defend his fellow peacekeepers from other counties, if they came under attack.

That's how pacifist Japan was after Second World War.

They can't even honour their war dead, including the civilians, in peace.

Abe was the one who was brave enough to realise the absurdity of Japan's position and tried to change it.

He saw the threat posed by the communists in Beijing and did his best to make them realise that they could not walk all over everyone in this region.

Some in Malaysia may argue that the Japanese did horrible things when they occupied this country, but as I previously wrote, our country had suffered many more deaths and atrocities during the communist insurgency supported by Beijing.

What happened in Hong Kong just months before the pandemic struck the world in 2020 confirmed the worst fear about Beijing's attitude towards those around it.

Tensions with Taiwan was also retched up to a point where the communists tried to stop others from sending vaccines to the island when the number of Covid-19 infections there got to a worrying height.

Japan was the first to defy Beijing by sending help to Taiwan in the form of millions of vaccine dosage.

Many Taiwanese admired Abe, as he continued to support their desire not to be bullied by the communists in Beijing.

My beloved, who studied in Taiwan and has many friends there forwarded me this tweet yesterday... 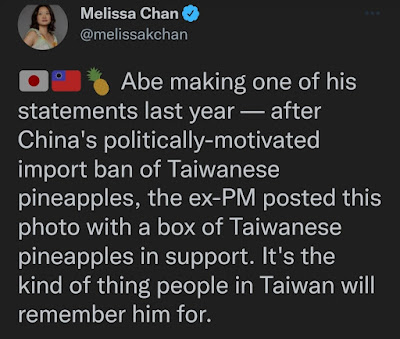 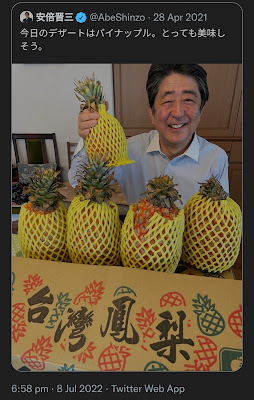 I was glad that when Abe stepped down as PM due to health reasons, Japan maintained the same attitude towards ensuring the stability of this region.

Despite being the longest serving Japanese PM, Abe didn't cling on to power.

He knew when it's time for him to go....unlike most Malaysian politicians.

Well, some Islamic religious people may not like me saying this.....but what the heck....