Let me start by saying that I'm not a legal expert and I'm not here questioning a decision of the court.

I do have the LLB(Hons) but I have never practice law. A case of lost interest, actually.

However, I still remember what I learnt about the basic principles of laws such as the rules of natural justice, which among others emphasise on the importance of the rule against bias.

Now this was what happened yesterday;

That's because Raja Petra wrote this;

For those who don't know Nazlan, he is the judge who was hailed as a hero by Pakatan people after he found Najib guilty in the SRC trial.

Raja Petra had in fact wrote a post on the profile of the judge;

Who is Muhammad Nazlan Mohd Ghazali?

Raja Petra has apparently got hold of some documents which embolden him to accuse the judge of being involved in corruption related to the 1MDB scandal when he was with Maybank prior to being called to the bench. 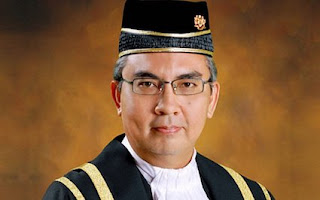 Nazlan was appointed as a Judicial Commissioner in 2015, before promoted to be a High Court Judge in 2017 and a Court of Appeal Judge in February this year.

Quite fast, if you asked me.

Whatever it is, I think the authorities need to act equally fast on Nazlan's police report as Raja Petra's allegations against him were quite serious and could undermine the credibility of our country's judicial system.

Having said that, it should be noted that Raja Petra has in his latest posting

claimed that the police had actually completed their investigation on Nazlan and urging them to make it public.

Well, if that's the case, I think the police should do just that. If it's not true, do say so too so that the public do not have any doubt over the matter.

Don't wait until the guy publishes another what appeared to be genuine document on the completed investigation.

Make the whole thing public and extinguish any doubt that the public may have on the judiciary because of the allegations made by Raja Petra against Nazlan....whether they are true or not.

Hopefully no one in power will interfere in this matter.

Anyway, back to the rule against bias which I learnt many years ago during my first year in law school, this is its basis as defined by Lord Alfred Thompson Jenning in

"Justice must be rooted in confidence and confidence is destroyed when right-minded people go away thinking: 'The judge was biased.'"

Was Nazlan biased when he sentenced Najib to 12 years in jail?

I don't know, but Raja Petra is persuading many right-minded people that he was indeed biased because of his alleged involvement in the 1MDB scandal when he was with Maybank.

Again, this matter must be addressed by the authorities and they must do so quickly.

As Lord Gordon Hewart famously said in his judgement of

"It is not merely of some importance, but of fundamental importance that justice should not only be done, but should manifestly be seen to be done."

Sorry, I'm not familiar with Malaysian judicial authorities on this matter as I only did English Law back then. Never did my CLP as I ran out of money and had to work right after I graduated.

Whatever it is, the basic principles should be the same, I believe.

(Note: I actually wanted to write more on this but I believe that would put myself at risk of being in contempt of court. So, please excuse me for my rather short take on this issue.)