Between a good lawyer and politically motivated lawyers

NST today highlighted this statement by lawyer Mohd. Faizal Mokhtar that his client

Sam had also repeatedly expressed her sadness over what had happened and sympathised with the families of the eight teenagers killed after a car ploughed into them in 2017.

"She has repeatedly said she sympathised with the victims' families. She is saddened with the loss of lives.

"Sam is a law abiding citizen and she has always said she would respect the court's decision. She is prepared to face the consequences if she is found guilty.

"However, we hope people don't view this as a racial issue," he told reporters after the Court of Appeal (COA) freed his client on bail.

Faizal said Sam was thankful her application to appeal against the Johor Baru High Court decision to jail her for six years and RM6,000 fine had been granted.

This Faizal guy is indeed a very good lawyer as he knows all the right things for his client to say in relation to her case.

The message that he conveyed from his client were also all true as those were what I had hoped she would say when I wrote this previous post;

Sam was right in choosing to stick with Faizal as her lawyer from the very start of her case.

He seemed focused on defending her interests instead of being distracted by the other issues surrounding the case.

The guy is definitely better than all those DAP lawyers or even Shafee Abdullah, who offered their services to Sam.

It was quite apparent that Faizal was not burdened by any political or popularity agenda in defending Sam.

The only objective of the defence in this case was solely for Sam to get a judgement whereupon she could later move on with her life.

This would not be the case if she had taken the DAP lawyers as her attorneys because they would programme the defence into a political campaign.

Instead of really defending Sam, they would have lashed out at the judiciary, the police, the government, the dead kids and everything else under the sun to promote their political agenda.

Just look at the recent case of Loh Siew Hong, who initially said all that she ever wanted was just to be with her children again but now got herself entangled in a religious dispute because her DAP BJP/LTTE lawyers have wanted to use her case as a political campaign platform. 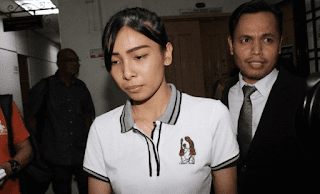 Anyway, I also want to express my respect here for Sam for being so cool in facing her predicament.

She was right to make it known that she was sad for the eight kids who lost their lives in the accident and that she sympathise with their families.

She was even willing to accept those punishment meted out by the court, which is something I really admire.

It's not about blaming others as many of her self-appointed defenders have been harping over these past few days.

Sam didn't blame the dead kids or insulted their memory by calling them future mat rempit.

She didn't even try to blame the parents of those kids for not locking them up at home at night.

As I previously wrote, the most important thing with the case now was not to find who's to blame but for us to regain our humanity over the loss of eight young lives and how to prevent such a tragedy from happening again.

I really now hope for Sam to win her appeal.