Being careful of Covid-19 and the RM10k compound

I went out just now because the boy I'm staying with at the moment asked for his favourite roti canai.

It was only the fourth or fifth time that I stepped out of the house since the start of my Covid-19 hideaway here in Kuantan about two months ago.

The other times I went out were either because the boy made a similar request or I need to get my supply of nicotine.

I didn't even go shopping because that was done by my friend, who is the boy's mother, whose place I'm staying in for now.

I will only be going back to KL when they lift the state border restriction.

Anyway, at the mamak just now, I scanned my registration at the entrance as usual and in addition to that I wrote the particulars of the boy on the book for those without the mySejahtera app.

I didn't do that previously because the boy is with autism. I assumed that it's okay as they could just contact trace the boy to me if anything happens.

But since the new laws were put in place, I decided not to take any risk.

They may slapped the RM10,000 compound on the boy if I don't register him before entering the premises.

I don't think the boy's mother would appreciate it too much if she has to pay such a sum. She's not rich, okay.

I can't afford it either, actually. That RM10,000 could sustain me for at least five months.

Really. My normal living expenses were less than RM2,000 per month. That covers for my food, fuel, toll fees, parking etc.

If they slapped me with the RM10,000 compound, I think I would just go to jail rather than paying it.

I don't think it's nice to stay in jail but I believe I could manage it.

I'm not much of an outdoor person anyway.

I simply need to stay out of trouble during this dangerous time. It's dangerous because of not only Covid-19 but also the compounds.

And the best way to avoid the danger is to stay in the house as much as I could.

Since I can afford to do that for now, that's what I'm doing.

Anyway, why bother to go out when I could get almost anything delivered to where I am now.

I'm not too much into dining out, hanging out with other people, having fun at parties and gatherings etc ....unless I'm in the company of people that I really like.....and I don't really like too many people, actually.

As a friend once told me, I'm actually quite an anti-social person.

Since, I'm now writing about being careful due to Covid-19, I think these people at their event yesterday are really not complying with the Covid-19 SOPs, 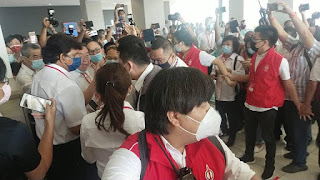 No social distancing at all.

The authorities should have gone to the event yesterday and slapped everyone with the RM10,000 compound.

Especially the loud ones there. So irritating.

They used to accuse BN of using phantom voters at elections but now they are accusing their own leaders of doing it.