I'm supporting the effort by DAP's Nga Kor Ming to be friends with Umno. 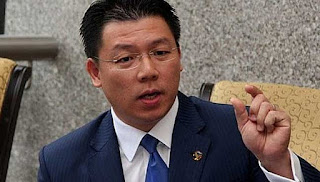 As I previously wrote,

I know, many of you would think this could never happen but who knows, Malaysian politics could be quite weird sometimes.

Anyway, just let me daydream of it for a while.

Yeah, Umno and DAP being friends is nice.

Maybe they could find a common ground for the good of the country.

And if that happens, I don't have to quarrel over politics too much anymore with my beloved who is a DAP supporter.

“Apart from ensuring stability, it can also prevent the government from being held hostage by PAS’ extreme populism, the threat to diversity and pressure towards fundamentalism, which are a threat to the secular and pluralistic spirit of the Federal Constitution,” he said.

I totally agree with him on that one.

I'm not so much against Pas as I used to be but there is a need to check on the penunggang agama among them who became more visible after the party joined the government side.

I will always remember the case of a Pas minister who went vacationing overseas at the height of Covid-19 scare and blatantly ignored the SOP.

Nga's letter was actually meant for the DAP grassroots who opposed the possible cooperation with Umno over the Perak crisis.

It was actually written in Chinese.

Well, the same as in Umno, DAP also have its share of extreme members and supporters who hate their opponents just for the sake of hating.

Such members and supporters also prefer to take the easy route of getting communal support by playing the racial cards.

But, I believe the majority of DAP and Umno people are not of that type.

They want what is best for the country and Malaysians, which is a tolerant multi-racial society as when the country was founded when it achieved Merdeka.

The question now is whether DAP and Umno are controlled by the majority good people or minority intolerant scheming politicians.

Let's wait and see on that one.

Honestly, my money is not on the good people winning but who knows, maybe we'll have a pleasant surprise.

Personally, I think the Perak crisis is an opportunity which opens the door to a possibly better political environment, which will contributes to a more stable and successful Malaysia.