Alhamdulillah, those BN/Umno MPs are not traitors

Received this via WhatsApp just now, 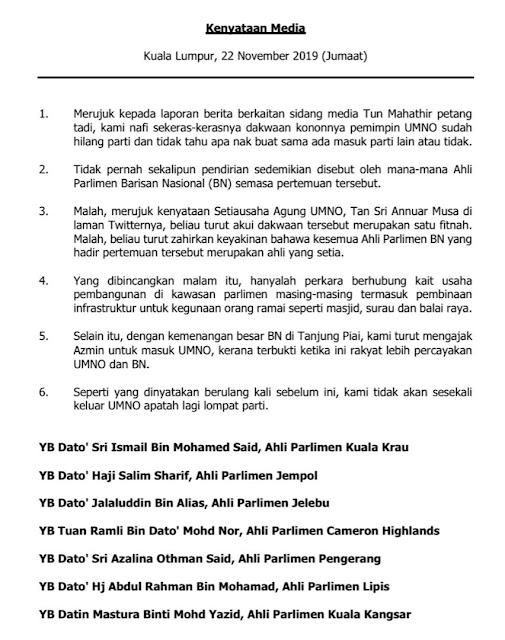 Those BN/Umno MPs who went to Azmin's house the other day are not traitors.

Well, I don't know why Dr Mahathir said all those not so nice things about them at the press conference, but hopefully Umno will not take action against them.

I was actually a bit worried when some Umno leaders started to whack those MPs over the past few days as it could lead to the party being divided again.

I'm sick of Umno infighting such as the one leading to the GE14 defeat.

I also never subscribed to that "either you are with us or against us" slogan of Umno leaders before that general election.

But I guess some Umno leaders and their people never learnt their lessons.

They so easily want to get rid of people whom they perceived as not having the same line of thoughts as them.

They don't seemed to care that Umno needs everyone onboard, especially now that the party is trying to win back the seat of power in Putrajaya.

All they care about is in securing their own positions in the party, even if it means weakening Umno.

Those who disagree with them were labelled as traitors,

They are of the attitude that Umno belongs to them and exist to serve their interests.

I really hope that Umno people will reject these arrogant bastards in their next party election in 2021.

I also hope that from now on they will not succumb to the temptation of money in exchange for positions in the party as these people will always offer them that.

Get yourselves good leaders, okay.

Do good for the country and rakyat.

Also, stay united. If you can do that, I'm sure there will be another Tanjung Piai soon.

Who knows, maybe GE15 will be like Tanjung Piai.