The haze was very bad today. 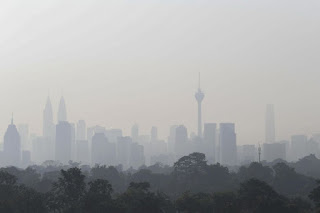 It has been like this in KL for quite a while.

As everyone knows, it was caused by people setting forests in Indonesia on fire so that they can set up farms and plantations.

It has been a problem since the 90s and I can't see any chance there will be a solution any time soon.

Not even the Malaysia Baru government seems capable of doing much.

When Indonesian president Jokowi visited Malaysia the other day, everything seemed the same.

Not much attention given to the haze problem.

The Pakatan Harapan environmentalists were also not saying much.

They appeared more busy fighting over Lynas which their own government had declared safe.

This is the latest

The 14-point infographic, citing information from the energy, science, technology, environment and climate change ministry, also said data and reports by government agencies and experts showed that Lynas’ operations in its plant in Gebeng, Kuantan, in Pahang, was controlled and safe.

Crazy guy that one.

I'm still waiting for the PMO guys to respond to this nonsense.

Tell MACC to probe Dr Mahathir la. He's the one who said Lynas is okay.

Go after Yeo Bee Yin, who is the minister in charge of environment too as her ministry's data on Lynas were quoted by the PMO.

In fact, go after the entire Cabinet because it was their collective decision to let Lynas continues its operation.

Seriously, if this Wong Tack, Fuziah Salleh and others like them were really concerned about the environment and well being of Malaysians, they should have switched to pressuring the government over the haze problem.

Go la and make noise about it.

Why they did not have a demo when Jokowi was here? The haze is from Indonesia what. That was scientifically proven, okay.

Lynas scientifically proven to be safe by even their own Pakatan government yet still they want to make noise pulak.

Still trying to deny that they lied over the years about Lynas.