National news agency Bernama estimated about 150,000 people at the event.

It's almost as many as the whole of DAP membership.

This is its report on what Umno president DS Najib Razak said at the event,

UMNO Remains Strong As It Always Struggles For The People - Najib

This is a picture from the event yesterday, 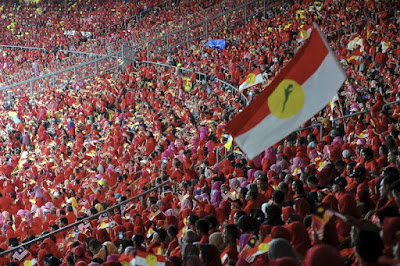 The last time I remember of such a gathering was the Umno's 66th birthday celebration on May 11, 2012.

This is a picture of the event from back then, 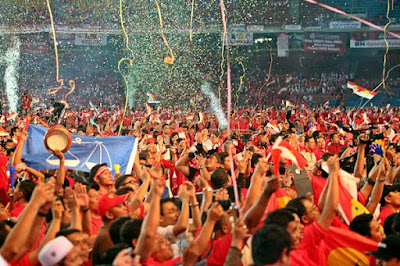 Looks the same and the number of crowd was equally as impressive as yesterday.

It was part of the built up to the 13th general election which was held just short of a year later.

The main reason for the gathering back then was as explained by Najib in this Bernama report picked up by The Star,


I believe the gathering yesterday was also held as a show of strength and part of preparations for the coming general election.

I'm not however a believer of big party gatherings being helpful in winning elections.

After all, despite the similarly big birthday celebration of Umno in 2012, which was followed by other crowd-pleasing events such as the Jelajah Janji DiTepati programme, BN did not do really well at the polls the next year.

Personally, I'm more for real works on the ground such as door to door campaigning, providing efficient community services, showing genuine care for the constituents, helping out when people are in trouble, etc.

It's after all a matter of winning the hearts and minds of the people.

Showing how strong a party is, doesn't really do that.

Okay, maybe it's good for party morale and such but that's all about it, I think.

It's something like having five main pages of your event highlighted by a newspaper which is read mostly by your own party members and supporters.

Don't know lah, but those are my thoughts.

BN at that by-election employed a very practical campaigning approach, especially by approaching voters at personal level and persuading them that BN is their best choice.

The BN campaign on the ground was led by local leaders as they knew the locals better. Outsiders, including high ranking party leaders were told to play a supporting role if they wish to lend a hand for the campaign.

There was hardly any big gathering or fun-fair type of events to spice up the campaigning.

Even outriders escorting VIPs were told not to use their sirens going into the villages, Felda settlements and residential areas.

Johor MB at that time TS Abdul Ghani Othman even told a group of local Wanita Umno members not to proceed with their plan to have a lunch gathering at the KFC outlet in Labis town.

The reason for it was to prevent the locals from getting irritated by what they may deemed as pompous behaviour among the Umno campaigners.

It was felt that the presence of a huge crowd of Wanita members in their red and white uniform swaggering around all over the place may have that very effect.

In contras, Pas which was heavily backed by especially DAP at that by-election embarked on their usual big ceramah and gatherings.

There were a lot of unhappiness especially among Umno people who came to Tenang for the by-election as they were told not to do the usual.

The unhappiest among them were however people from the Umno headquarters in KL.

They were told that for the Tenang by-election, they didn't have to organise any event which may costs the party a lot of money.

In another word, Johor Umno at that time was saying that no one would be allowed to make money out of the by-election at the party's expense.

If those fun-fair like events were allowed to be held, contracts would have to be doled out to certain individuals and paid by the party. This, Johor Umno felt was not worth the expenses and furthermore not really helping the campaigning effort.

Despite BN later on winning the by-election by a significantly increased majority, the unhappiness of the Umno headquarters people remains.


Johor Umno was again heavily criticised at a party war room meeting after the by-election.

The debate on the matter led to the Johor Umno war room director being later on banned from attending future meetings.

The excuse given was that only those who led an Umno division were allowed to attend the Umno headquarters' war room meeting. The Johor Umno war room director was the only one who was not a Ketua Bahagian.

All the nonsense were despite Najib himself praising the leadership of Johor BN and Umno for the victory in Tenang.  The campaigning for the by-election was described by him as being the most well managed and costs effective ever.

I'm not sure what it's going to be for Umno and BN in terms of campaigning style after this. After all, the next general election may be just a matter of months from now.

If I'm an Umno member or supporter, I would prefer Najib as my party leader to do the right thing rather than allow some people to use the party to enrich themselves via fun-fair contracts.

Well, of course I'm not a party member or even a supporter, and therefore all that I'm writing here is just actually sharing my experiences and thoughts on the matter.

If Umno wants to have a fun-fair like campaigning for the next general election, than that's their choice.

None of my business, really.