A friend forwarded me this earlier this morning, 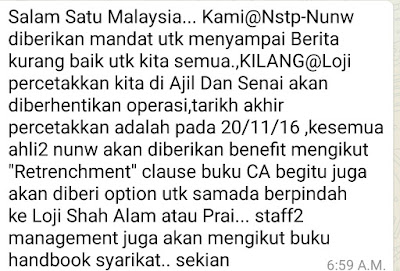 It's a wassap message being circulated among New Straits Times Press Bhd workers at its printing plants in Senai, Johor and Ajil, Terengganu.

It said they are closing them down and the workers there will be retrenched if they are unable to move to the company's other two printing plants in Shah Alam and Prai, Penang.

Of course most of them will be affected, especially those working on the floor of the plants.

As far as I know, if the message was true, this is the first time the company will retrench its workers.

I got some friends working at the NSTP Senai plant and I hope they will be alright. 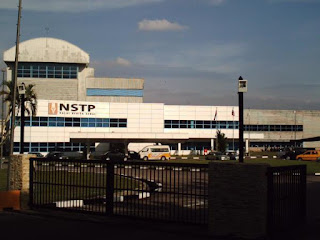 Guess things are quite bad for the newspapers these days.

I hope, if this downsizing exercise at NSTP is true, it will be limited to what it is now being rumoured.

It's not going to be nice at all if it later on also involves the retrenchment of journalists.

Too many of that of late.

I got several journalist friends who recently lost their job that way.

Those are former online journalists though.

So, online journalism is not so secured either.

The media industry is simply not the best place to be in at the moment, I guess.