GE15 only after the poor people are angry

According to Mat Hasan,

Well, I'm not sure whether to believe in politicians' promises.

For one thing, Pakatan people promised a lot of things for the election in 2018 but didn't fulfil almost all of them. 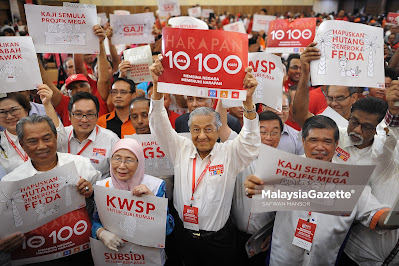 The few that they fulfilled were mostly for their political expediency.

Okay, they got rid of GST, but that one turned out to be bad for the country. Lost of revenue, okay.

What else did they do for the rakyat during that 22 months?

Things like selling off the country's assets don't count, okay.

Anyway, Ismail Sabri can actually not fulfil his promise too.

I saw some clever analysts said so in this story;

1. Parliament observer Ong Ooi Heng said even if Umno gives him the boot, Ismail Sabri can still retain the support of the Perikatan Nasional (PN) and Pakatan Harapan (PH) coalitions, as well as those from Sabah and Sarawak.

2. Echoing Ong, Singapore Institute of International Affairs senior fellow Oh Ei Sun said an Umno dismissal would not necessarily remove Ismail Sabri as prime minister.“The honourable thing for a PM to do is to call for a confidence vote whenever he doesn’t feel like he still commands the majority,” Oh said.“In any case, PH’s and PN’s parliamentary support should carry him to a majority, even if Umno withdraws its support for him.”

Yup, these kind of analysts are also quoted these days to encourage Ismail Sabri not to call for a snap general election.

They even offered Ismail Sabri to be their PM.

Looks like they really don't want an early GE15.

Even when Najib is already in jail.

Maybe they are hoping that the coming spike in inflation across the world due to the war in Ukraine will hit Malaysia hard.

The hardest hit will be the poor and we know which group is the poorest in this country. Not the Indians, okay.

Easier to spin their tales like before when poor people are angry.

Maybe they can't afford to let the rakyat have the mandate to elect a strong and stable government, which could properly handle the coming troubles.

Go ahead Mail. Maybe DAP can offer you to be their chairman, like those token Melayu people they have in their party.

Guan Eng can then become mentor chairman or something.

Actually, I don't really mind GE15 to be held at the end of this term next year.

I'm quite sure I will survive the next one too.

Yes Mail, stretch it till the final deadline in September next year.