A friend in Japan asked me yesterday what to make of the Rulers' decision for parliament to reconvene.

I told him that they have most likely did so because they were trying to distance themselves from the increasingly unpopular Muhyiddin's administration.

I believe that the Rulers felt that Muhyiddin and his gang are making them looked bad.

For instance, the state of Emergency issue got the Agong entangled in it with people believing that he was in cahoot with Muhyiddin by allowing it to happen.

I was reliably informed that one of the Sultans had even refused to take calls from the PM prior to the Conference of Rulers meeting on Wednesday.

Now the pressure is on for the parliament to be reconvened and Muhyiddin has to deal with it on his own.

His people are now selling the idea that parliament should reconvene in September or October and I think that's because they are trying to buy as much time as possible to make sure they have enough MPs on their side to face a no confidence vote which is almost certain to come.

Well, for one thing, the vaccination process is now getting better and this is important because the more people have it, the less anger there would be against the government.

Businesses may even be okay again with more people vaccinated.

This is what Muhyiddin's opponents don't want to happen when it's time for them to table that no confidence motion.

They want to do it now while the government struggles and fumbles, so that it could be used to justify themselves taking over Putrajaya.

Looking at things the way they are now, I think Muhyiddin will indeed hang on to power as this is after all a matter of survival.

He can't give up the fight because if he does so ,he would not only be condemning himself but also those who have been supporting him.

As I previously wrote, let's say Pakatan takes over, I'm quite sure people like Azmin and the other PKR turncoats will have their asses fried by Anwar.

They will indeed fight back and persuade Muhyiddin not to give up.

After all, they still have the edge of being the ones who hold state powers now.

I'm quite sure Muhyiddin would even try to cut a deal, especially with Umno, to make sure he has enough number in parliament to face a possible onslaught by Anwar and gang.

Anwar will of course try the same thing, but I have a feeling that Muhyiddin will win on this one as he, being in power has more to offer.

Then there's DAP inside the Anwar's camp which many Umno people may still probably find hard to accept as their ally.

Anyway, even if Anwar somehow managed to get Umno inside his pocket, Muhyiddin still have the option to dissolve parliament and call for a fresh election.

I was hoping for this not to happen because of the pandemic but it's now becoming a very likely scenario.

Sarawak, for one, is getting prepared for its state election with the end of the Emergency.

In the event of a snap election, I think Muhyiddin and his people may even be willing to compromise with Umno/BN or even be its junior partner to form a solid Malay Muslim block along with PAS against Pakatan.

His Pribumi Bersatu's motto may even be changed to "Asal Bukan Pakatan".

Azmin, for instance may likely think it's better to be bullied by Umno than getting his ass fried by Anwar in revenge for the Sheraton Move. Pakatan led by Anwar may just throw some corruption charges against him the way they did to Umno leaders after GE14. 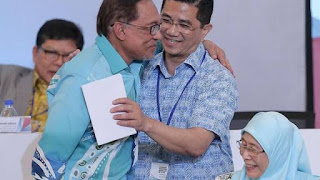 Sigh. That kind of quarrels can be quite bitter, you know.

Anyway, the election will of course cause another wave of Covid-19 infections and more people will die.

That actually goes without saying. For the sake of democracy, I would say.

Quite expensive this democracy thing, actually.

Well, let's just hope that by that time, the majority of Malaysians are already vaccinated, so that not too many of us will die because the country needs to decide who should lead it.