Chinese for Chinese, something else for others

A friend got irritated yesterday after reading a Malaysiakini report about a DAP leader telling the Chinese community about the failure of MCA to complain about Budget 2021 which supposedly does not provide much for them.

The DAP leader could either be Lim Guan Eng or his father Kit Siang, as my friend only gave me an excerpt of the report which states that he is a "Lim". I don't subscribe to Malaysiakini, so I can't read the full report.

Anyway, what really pissed  off my friend was that the statement as reported by Malaysiakini was supposedly issued by DAP only in Chinese.

"Why can't they issue the statement in Bahasa and English too?" he asked.

Then my friend in a way answered his own question when he forwarded this screenshot of a tweet by someone I believe to be from Malaysiukini, 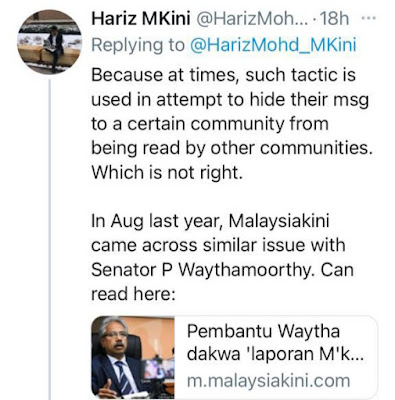 To everyone else, they said its Malaysia for Malaysians but to their own respective ethnic groups, they make it as if they are the champion of that particular race.

And it's not being practiced by just the Chinese leaders of the party.

Here is an Indian DAP leader during the Rantau by-election last year,

That's why I always insist in this blog that those who are so fond of accusing others of being racists are the actual racists themselves.

They accused others of being racist because they want to score political points and that's just about it.

As for the supposedly race-based entities of this country, at least they are honest about what they are and they exist within the confines of the country's constitution.

Last week, there was this story,

The statement by Kuala Lumpur and Selangor Chinese Assembly Hall was also issued only in Chinese.

It's an extremely embarrassing announcement for them, I think.

Ya lah, their president, who is a prominent Chinese community leader being charged with polluting river and causing million of people in Klang Valley to suffer from water cuts.

Someone suggested to me that they only issued the statement in Chinese because they were trying to hide the news from the other communities.

After all, a Chinese community leader was supposed to be an upright and principled person and does not go around polluting rivers to cut corners for profit.

Maybe that's the case, but my past experience of working with Chinese guilds made me believe that they only issued the statement in Chinese because they simply don't have anyone with proper English or Bahasa Malaysia skills working for them to do the statement in those languages.

Really, I have seen it many times. They ended up just issuing a statement in Chinese hoping for the Chinese reporters to translate it for their other fellow journalists.

I know, they should have at least someone who knows the national language to do the statement, but that's just how it is. Those working for Chinese associations are mostly Chinese educated and they tend to be not confident enough to draft such an important statement in other languages.

But that's how I see it. Maybe I'm a bit bias on this because of my mother who is Chinese educated.

Anyway, does it really matter that the guy who allegedly polluted the river is a Chinese community leader?

I, honestly, don't like to see it that way. The same if the alleged polluter is a Malay community leader. The community that the person represents shouldn't be blame for what he/she allegedly did.