So, they stopped the Dong Zong's congress because people protested against it.

The Chinese educationists were trying to explain why they were against the teaching of Jawi/Khat at the Chinese schools.

I say, let them speak their mind.

Whether they make sense or not, doesn't really matter.

Whatever it is, I don't think they are going to insult people of other races or anything like that.

By right, we all should have freedom of speech. That includes the Dong Zong people.

If they want to explain their stand, we should let them do so.

Why must others got all so worked up?

We shouldn't get angry with people who are trying to explain themselves.

Anyway, I think I have been consistent about this.

Let the Chinese schools remain as they are. 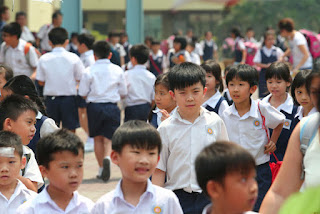 Don't force people to learn unnecessary things that they don't want to learn.

If anything, it's their loss, not ours.

No need to sibuk-sibuk, okay.

This whole nonsense started when the education ministry wanted to introduce the khat in schools, including the Chinese ones.

It's I think a follow up to that Pribumi Bersatu-initiated congress where they among others proposed for the closure of vernacular schools, which in this case I believe was targeted mostly at Chinese schools.

It's a case of Pribumi Bersatu trying to be more Malay than Umno and Pas.

I just want to stress that as far as people explaining themselves, I'm all for it.

Even if the explanation doesn't make sense.

As long as what were said do not break the law, I think it's okay.

Next time people want to say something and other people complained, are we going to stop them from speaking?

Ya, so much for freedom of speech and expression in Malaysia Baru.
Posted by Annie at 11:02