Nice to be a minister, I guess

I don't know who is this with Syed Saddiq, but I think she is very pretty, 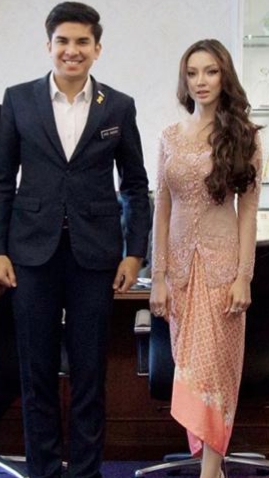 The picture is actually a screen grab of a video taken at Syed Saddiq's office.

Guess it's one of those perks of being a minister, that is getting to meet beautiful people.

Really nothing wrong with that, even if Syed Saddiq is to like her.

At least that should quell some not very nice rumours about him.

You know lah, Pakatan leaders got all sort of rumours....some even got videos some more.

Anyway, I have been lazy these past few days.

Not in the mood to write.

I looked at the issues that had been going around of late and felt that they were not worth commenting.

They were mostly nonsense which will not change Malaysia for the better.

For instance, Hishammuddin Hussein was said to be plotting to form a new government without DAP and Amanah.

That's a clear case of bullshit being stirred to break up the BN-Pas cooperation by sowing the seed of discord which hopefully will trigger in-fighting.

I was quite surprised that a top Pribumi Bersatu blogger even suggested for Hishammuddin and KJ to team up to lead Umno.

It's dumb and just a plain cheap shot hoping to cause leadership crisis within Umno which is making steady recovery progress.

And, of all people, Hishammuddin? That's stupid.

I hope Umno and its allies, along with Pas will stay the course and not be distracted by such nonsense.

And of course, they need to convince the people that they are now better than Pakatan and what they themselves used to be.

Okay, I need to get back to work now.

And I'll try not to be too lazy after this.