Last week I wrote that I don't support the


That's because I believe in


I'm against its planned resolutions which include the closing down of Chinese schools.

I also wrote that I don't think Umno and Pas would be involved in the event.

Despite it being touted as organised by public universities, the event actually belongs to Dr Mahathir's Pribumi Bersatu.

Umno and Pas had previously vowed not to have anything to do with Pribumi Bersatu and other parties aligned to DAP in Pakatan Harapan.

Yesterday, however, it was confirmed that Umno and Pas will take part in the event.

So, what is actually happening?

My take is that Dr Mahathir's people had probably approached the Umno and Pas leadership and convinced them that their side also wanted to be part of the Perpaduan Ummah thing.

I believe they could have told the Umno and Pas people that they were also fed up with being an ally of DAP which is trying to push its Malaysian Malaysia agenda from their seat of power in Putrajaya.

They probably had said that DAP is backing Anwar to push Dr Mahathir out of the PM office because once the guy is in power he would repay the support by giving in to that agenda.

Do note that Anwar had not been invited to the event. I also have yet to see any news about DAP's lackeys in Amanah being invited. 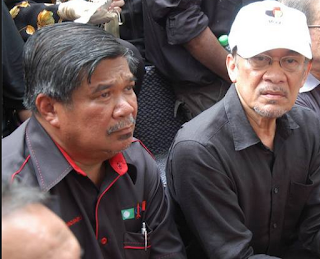 Dr Mahathir's people must have been very convincing about all these when they talked with the Umno and Pas leaders.

If this speculation of mine is right, this could be the end of Pakatan Harapan, and we Malaysians are set for another political roller coaster ride.

We may even have a snap general election as early as next year.

Anyway, I'm still not supportive of this event on Sunday for reasons that I wrote in my previous post.

I still believe in a moderate multi-racial Malaysia.

I believe the Umno-Pas' Perpaduan Ummah thing is good enough for that.
Posted by Annie at 12:24