About Bon Odori and visiting a Shinto temple

So, the religious people are now saying that the Bon Odori celebration is haram for Muslims.

And all these while I thought the festival is celebrated here just for fun and enjoying Japanese stuff.

Never been to one despite it being actually celebrated here over the past 30 years, but I wish I had, now that as a Muslim I'm no longer allowed to do so.

I wonder how many of those Muslims who had been to the Bon Odori celebrations here over the years have actually lost their faith in Islam.

Well, I once visited the famous Kiyomizu-dera temple in Kyoto and am still very much a Muslim.

I found that the scenic Shinto temple more of a tourist attraction than a place of worship, actually.

It was fun walking up and down the hill where the temple is located while shopping for authentic Japanese stuff at the shops along the pathways.

I saw quite a number of Malaysian tourists, including girls in tudung wearing rented kimonos posing around the temple complex for pictures.

It was late autumn and the scenery was fantastic. 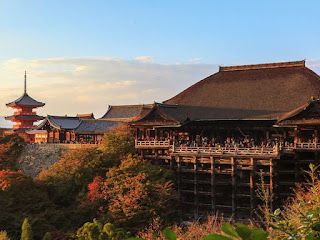 After the trip, I had a chat with my Japanese friend and asked why the temple felt more like a tourist attraction than a place where people worship their gods.

He laughed and said in Japan, religion is categorised the same as entertainment as the majority of Japanese don't take religion too seriously.

The guy, who is a political analyst said that was why at first he was baffled with how religion-based parties in Malaysia could do so well.

Personally, I don't find the Bon Odori celebration here is a real threat to the faith of Muslims who took part in it.

It's more a cultural rather than a religious thing. A bit of a cosplay Japanese party, really.

Many Malaysians love the Japanese culture and it's an event where they could express their fondness of it.

Of course, the religious people see it differently.

I guess, the religious authorities will after this tell Muslims more firmly that it's haram to join in the celebrations of Deepavali, Christmas, etc.

Well, they are the experts and being a Muslim, I would try to abide by such a fatwa as much as I could.

Hopefully they wouldn't ban me from celebrating Chinese New Year because that would give me quite a bit of a problem.