Sam Ke Ting should not be exploited for racial political propaganda

I first wrote about the story of eight kids being killed in a cycling tragedy in JB on Feb 18 2019,

I put the pictures of all eight dead kids in that post to remind people that they were real kids and not some caricatures of pesky worthless would be mat rempits as painted by some quarters at that time.

I tried to make people understand that they shouldn't so easily judge the dead kids because they died like that...and because of their background.

Whatever it is, I didn't say that the girl who drove the car which hit the kids was guilty for causing their death.

I understand the need to be objective over the whole thing.

As I repeatedly said in that post's comment section, the most important thing was not finding blame but for us to regain our humanity over the loss of eight young lives and how to prevent such a tragedy from happening again.

I didn't find anything wrong when the magistrate court acquitted the girl Sam Ke Ting in 2019. 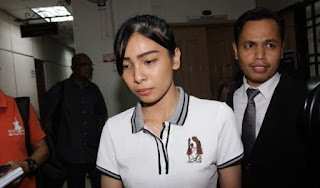 I remember telling myself that it's good for her to be found not guilty of causing the kids' deaths.

After all, I do have faith in our judicial system.

Then yesterday, the High Court decided to overturn Sam's acquittal and sentenced her to six years in jail and RM6,000 fine.

Honestly, I was surprised because it seems quite harsh despite the fact that the whole thing involved the deaths of eight kids.

We cannot be respecting only the court's decisions that we like and not those that we dislike.

After all, Sam can still appeal to the higher courts.

Unfortunately, I found that Sam's case for clemency has apparently taken a racial and political tone with some quarters surreptitiously painting it as a crusade of defending a Chinese girl from the unfair and evil system set up by the Malay establishment.

The ones who immediately surged forward to defend her were mostly Chinese organisations and leaders, with DAP and MCA racing each other to offer their help.

It's good for Sam that she's getting support and help, but I wish they didn't make it so obvious like that.

If Sam is a Malay girl and the dead kids were Chinese, do you think they would fall over each other in trying to help her?

I also wish that some of Sam's supporters could try not to behave like assholes too much.

You can see that in this report by Malay Mail;

“We Malaysians are horrified by the new sentence of Sam, where facts supported that she was a responsible driver, the real victim in this accident. It was the failed parenthood of the parents of the future mat rempit that allowed their children to roam in the street with modified bicycles, or ‘basikal lajak’ at 3am.

“We do not accept this judgment, and seek to have her sentence overturned, so not to rob the bright future of a young, innocent Malaysian citizen,” the petition said.

Yes, I do agree that Sam has most likely suffered because of the tragedy. She has to deal with the fact that she was involved in an incident which took the lives of eight kids and faces the law for it.

But she's still alive and as pointed out by that supporter of her, she still has a bright future.

The eight kids were on the other hand dead.

No bright future for them

Are they not victims in the incident too?

The Sam's supporter blamed the incident on "the failed parenthood of the parents of the future mat rempit", as that effectively makes the lives of the kids worthless.

Hey, I'm okay if you want to defend Sam, but do you have to say that about the dead kids and their parents?

I even sense a tinge of racism when the Sam's supporter who used a Malay name to initiated the online petition described the eight dead Malay kids as "future mat rempit".

Honestly, I don't think Sam needs these kind of supporters, whom I believe are actually trying to win some political or racial brownie points from her case instead of really helping her.

Yes, I do hope that she will win her appeal against the conviction, but without having to become a propaganda instrument of those people.

Her case was an unfortunate tragedy, which took the lives of eight kids.

It's not about race or politics.